Initially, and then for quite a long time, Fascism did not introduce anti-Jewish laws, even though it progressively reduced the presence of the Jews in public office.

After 1936, during a new totalitarian impetus and after the spread of antiblack racism, and the rapprochement of the country to Nazi Germany with the ‘Rome-Berlin Axis’, a new period of strong anti-Jewish propaganda took place.

On 31 December 1936, Mussolini published an article in the Popolo d’Italia in which he stated that anti-Semitism was an ‘inevitable’ consequence of there being a ‘too much Jewish’ element. The ‘Jewishing’ Jews, namely those Jews who maintained some kind of Jewish identity, were no longer considered compatible with Fascist Italy.

In 1938, the anti-Jewish campaign gained strong momentum when a programmatic text with the title Il fascismo e i problemi della razza (Fascism and the Problems of Race) (known as Il manifesto fascista della razza (the Fascist Manifesto of Race), 14 July 1938) and, at the beginning of August, the magazine La Difesa della Razza (The Defence of Race) were published. During the same month, through a racist biased census, the regime recorded the Jewish population present on the national territory. During the summer, ad hoc bodies were set up to study measures to tackle the new ‘racial issue’, such as the ‘Directorate General for Demography and Race’ (Demorazza), in the Ministry of the Interior, and the ‘Research Office for the Race Problem’ in the Head Office of the Ministry for Culture.

Italy was ready to enact anti-Jewish legislation as had happened after 1933 in Nazi Germany and as was happening in other parts of Europe, such as Romania, Hungary, and Austria, which had been annexed to the Third Reich.

The first anti-Jewish Decree-Laws ‘for the defence of race’, requested by Mussolini, were approved by the Council of Ministers of the Kingdom of Italy during the sittings on 1 and 2 September 1938. They affected schools and universities, on the one hand, and foreign Jews, on the other. After the so-called ‘Declaration on Race’ by the Grand Council, which, in its sitting on 6 October 1938 laid down the criteria for the definition of the ‘Jewish race’, in its sittings on 7, 9, and 10 October 6 1938 the Council of Ministers approved the provisions that would become the most important body of anti-Jewish measures, i.e. Royal Decree no. 1728 of 17 November 1938. All the decrees were countersigned by Victor Emmanuel III and converted into law by the Chamber and the Senate in December of the same year.

From this moment on and until 1943, the regime issued – mainly by ministerial circulars – countless rules that removed and excluded Jews from work, school, and from public life. The entire State machinery was at work to target what Mussolini defined, during an acclaimed public speech in Trieste, ‘an irreconcilable enemy of Fascism’. The laws and decrees also affected people of Jewish descent but of Catholic faith, since the definition of Jew was based on biological-racist criteria. ‘Racially mixed’ marriages were also banned.

Jews with government approved merits were granted the so-called ‘discrimination’, namely a partial exemption from persecution.

The anti-Jewish legislation was also extended to the Italian possessions of the Dodecanese and Libya, for which an ad hoc law was passed in 1942.

As in Nazi Germany, Fascist Italy was beginning to separate part of itself, those of ‘Jewish origins’, from the rest of the population, consequently forcing the Jewish minority to emigrate.

By 1938 Italy had been transformed into an anti-Semitic State.

On 14 July 1938, the ‘Manifesto of Racist Scientists’, abbreviated Manifesto of Race, is published in the Giornale d’Italia. Reported the day after by the national press, the manifesto led to a new violent and systematic anti-Jewish campaign. It supported the... 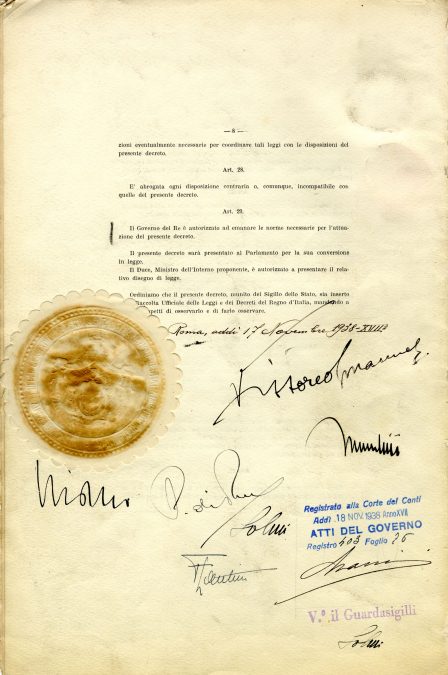 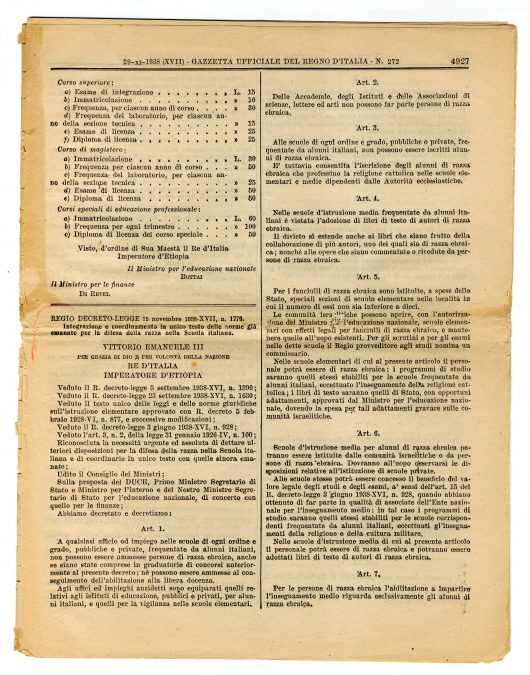 Official Journal of the Kingdom of Italy, November 29, 1938. Royal Decree-Law of 15 November 1938-XVII, no. 1779, with measures for the ‘defence of race in Italian schools.’ Fondazione Centro di Documentazione Ebraica Contemporanea, Milano 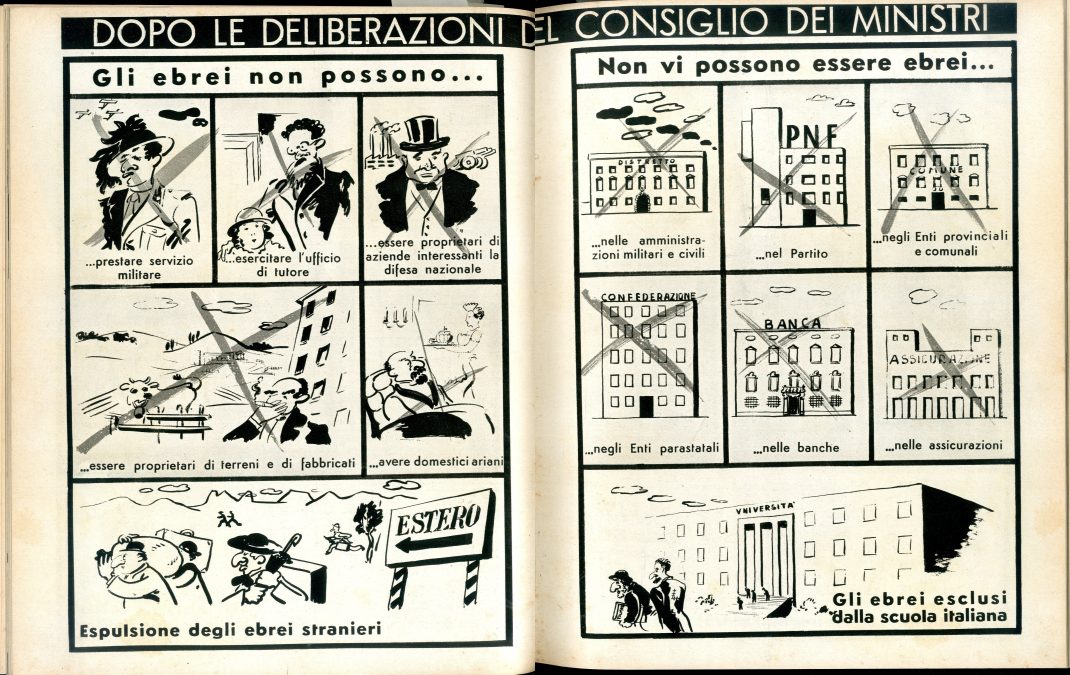 The prohibitions of Royal Decree-Law of 17 November 1938 for the ‘defence of race’ appear in the anti-Semitic and racist magazine directed by Telesio Interlandi. ‘Gli ebrei non possono…’ – ‘Non vi possono essere ebrei…’ (‘Jews cannot…’ – ‘There can be no Jews…’), La... 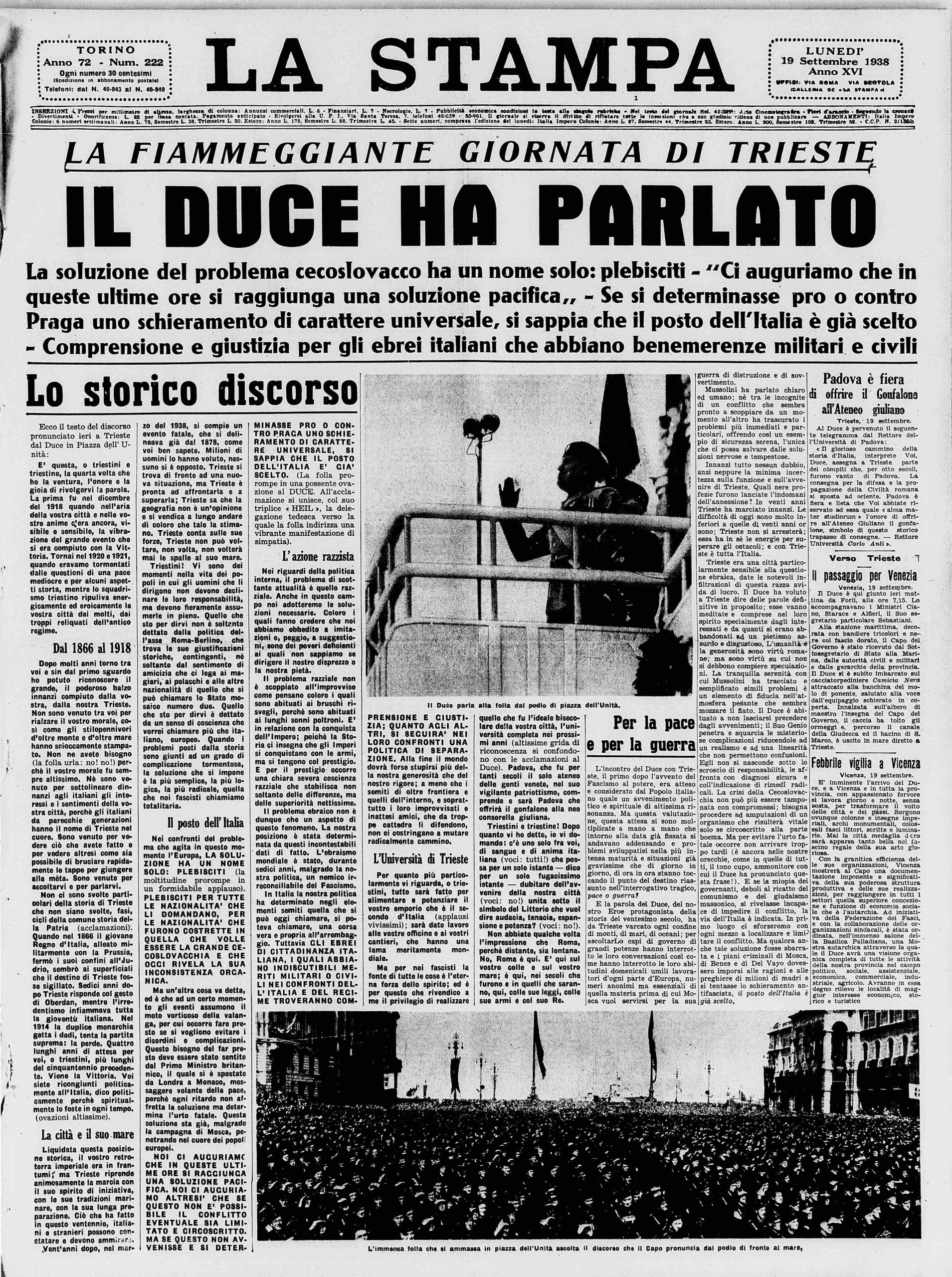 La Stampa, as other newspapers, reproduced on 19 September 1938 the ‘historical speech’ of Mussolini in front of crowds in Trieste. In the paragraph ‘racist action’, among other things, the following statement by Mussolini was reported: ‘For sixteen years, despite our... 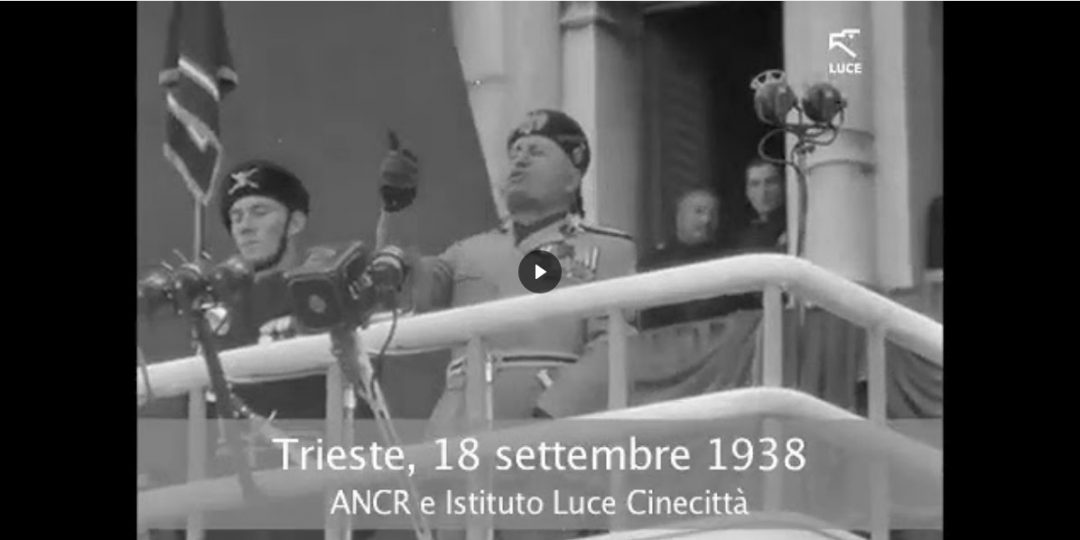 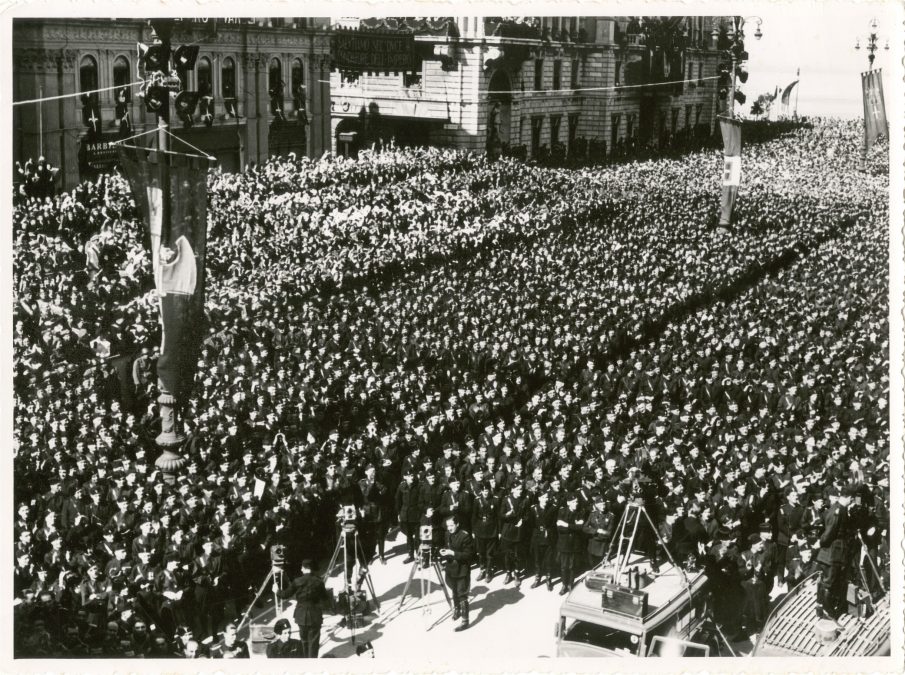 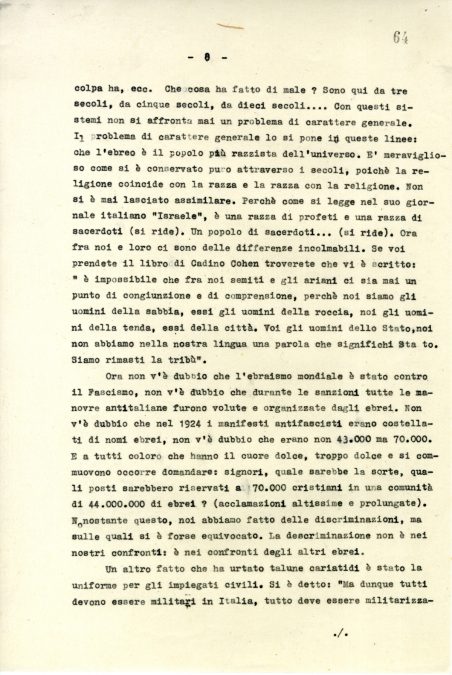 25 October 1938. In a speech reserved to the National Council of the National Fascist Party, Mussolini returned to the ‘Jewish problem’. He defined once again ‘global Judaism’ as an enemy of Fascism and invited those who have ‘too tender’ a heart to imagine ‘what... 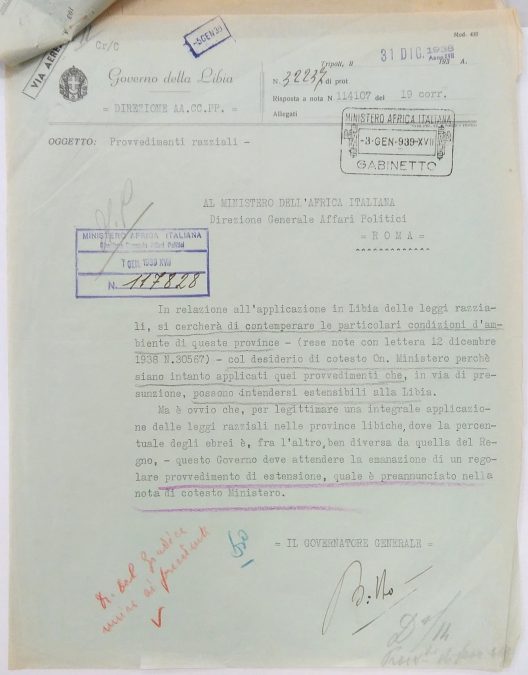 Libya, December 1938. The governor of Libya, Italo Balbo (1896-1940), asks the Ministry of Italian Africa to take account of Libya’s special conditions before applying the whole body of anti-Jewish laws. Consequently, a part of them is not applied until 9 October... 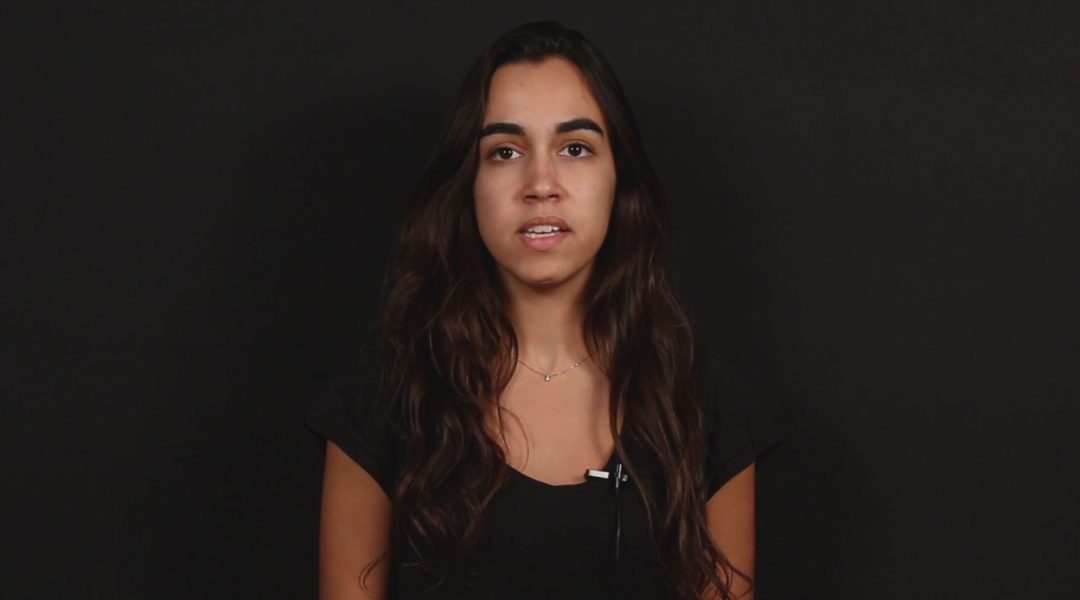 Anti-Jewish provisions are recited by Alex Pandolfi and David Vivanti, of Rome’s Jewish High School Renzo Levi, and by the students of the Scientific and Sports High School and the European Classic High School of the Boarding School ‘Vittorio Emanuele II’ in Roma,...