On 10 June 1940 Italy entered the war alongside Germany. The persecutory legislation became even more radical, starting with foreign Jews, who Fascism had for a long time intended to eliminate from Italian territory: in 1938 a decree had ordered the removal from Italy of all those who had established their residence there after 1918.

In June 1940 the regime ordered that Jews coming from ‘States with anti-Semitic legislation’, as well as those who had moved to Italy from other territories of the Mediterranean Sea under Italian control, be imprisoned in internment camps or obliged to live in specifically designated municipalities. These were places of imprisonment without physical violence, where the conditions cannot be compared to those of the Reich’s concentration camps. Camps were often set up in existing facilities, such as abandoned monasteries; in some cases, new internment facilities were built, such as Ferramonti in Tarsia, Calabria, the largest among the Italian internment camps. Here, in September 1943, when the British Army reached the camp, there were over 2000 people, including about 1500 Jews.

More than 400 Italian Jews were officially classified as a ‘real danger’ to public order and were detained in internment.

The ‘San Giovanni’ internment camp was set up in Rhodes where, in October 1940, 500 shipwrecked foreign Jews from the ship ‘Pentcho’ were interned until their transfer to the Ferramonti camp in 1942.

In Libya, after Italy’s entry into the war, foreign Jews began to be interned in the concentration camps of Tagiura, Buerat El Hsun, and Hun; after January 1942, these Jews were removed to Tunisia or deported to Italy. The Jews of Cyrenaica, after the region was taken back by the Italians in 1942, were sent to the Giado and Jefren camps. Giado became known for its terrible living conditions, which resulted in a high mortality rate, caused in particular by the spread of a typhus epidemic. 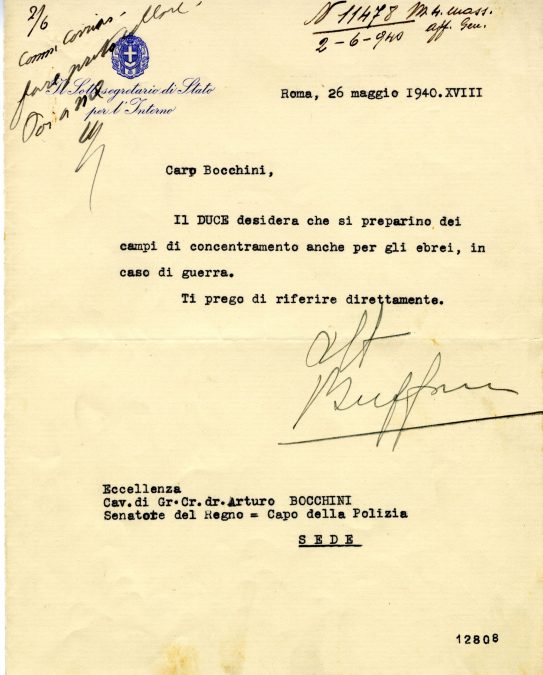 26 May 1940. A few days after Italy joined the war, Undersecretary of the Interior, Guido Buffarini Guidi (1895-1945), informs the Head of police that Mussolini, ‘in the event of war’, wants to create concentration camps for Jews. Archivio Centrale dello Stato,... 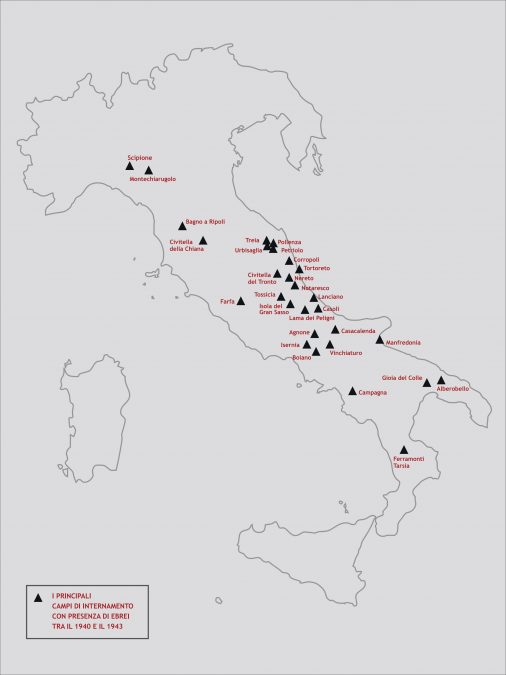 ‘The main internment camps with Jewish presence between 1940 and 1943’. 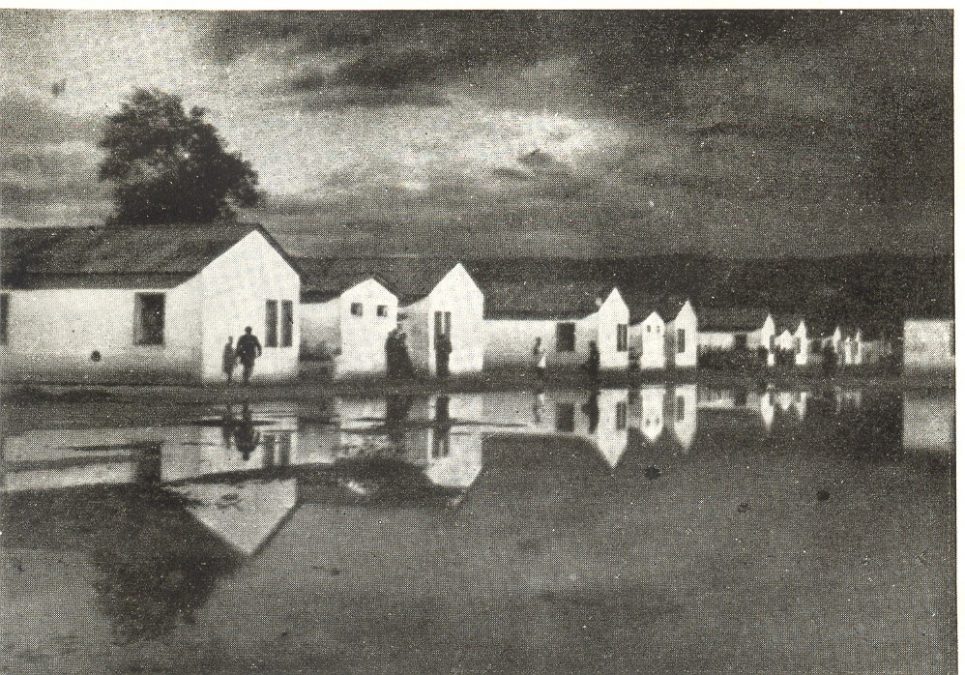 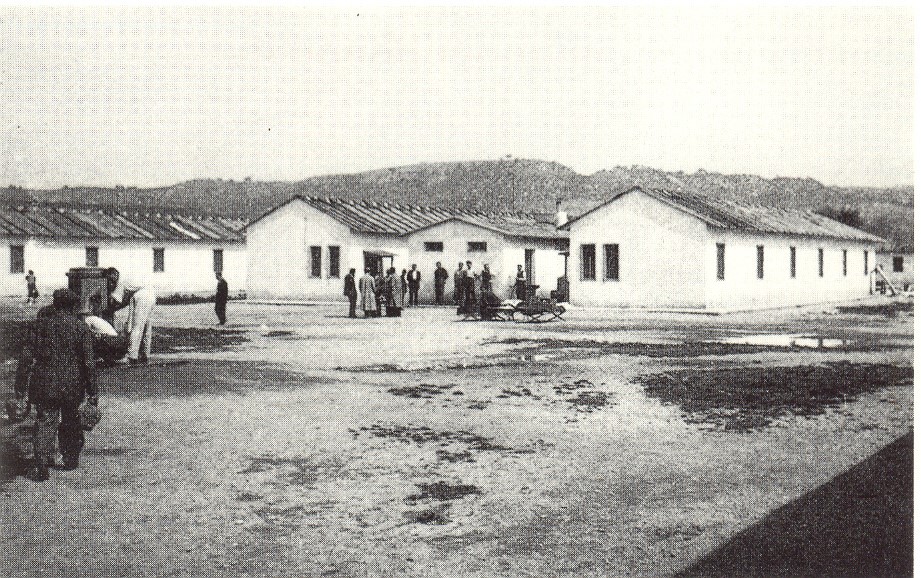 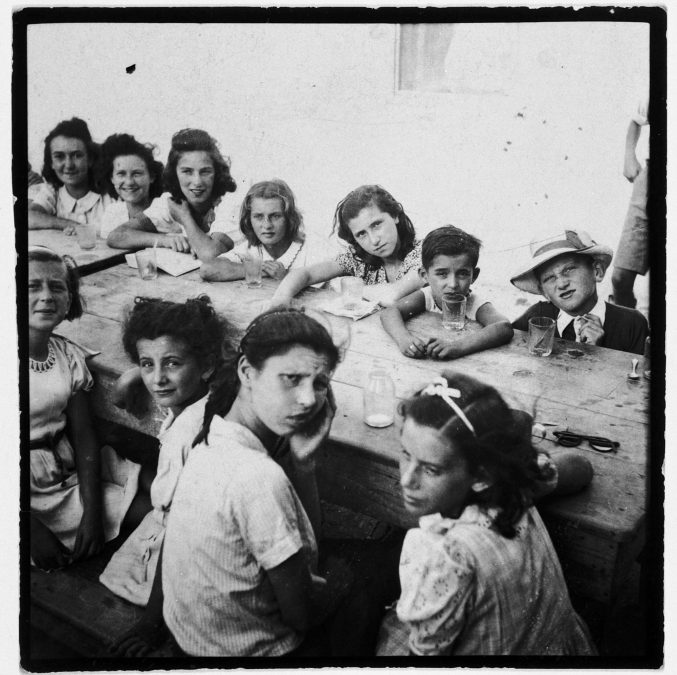 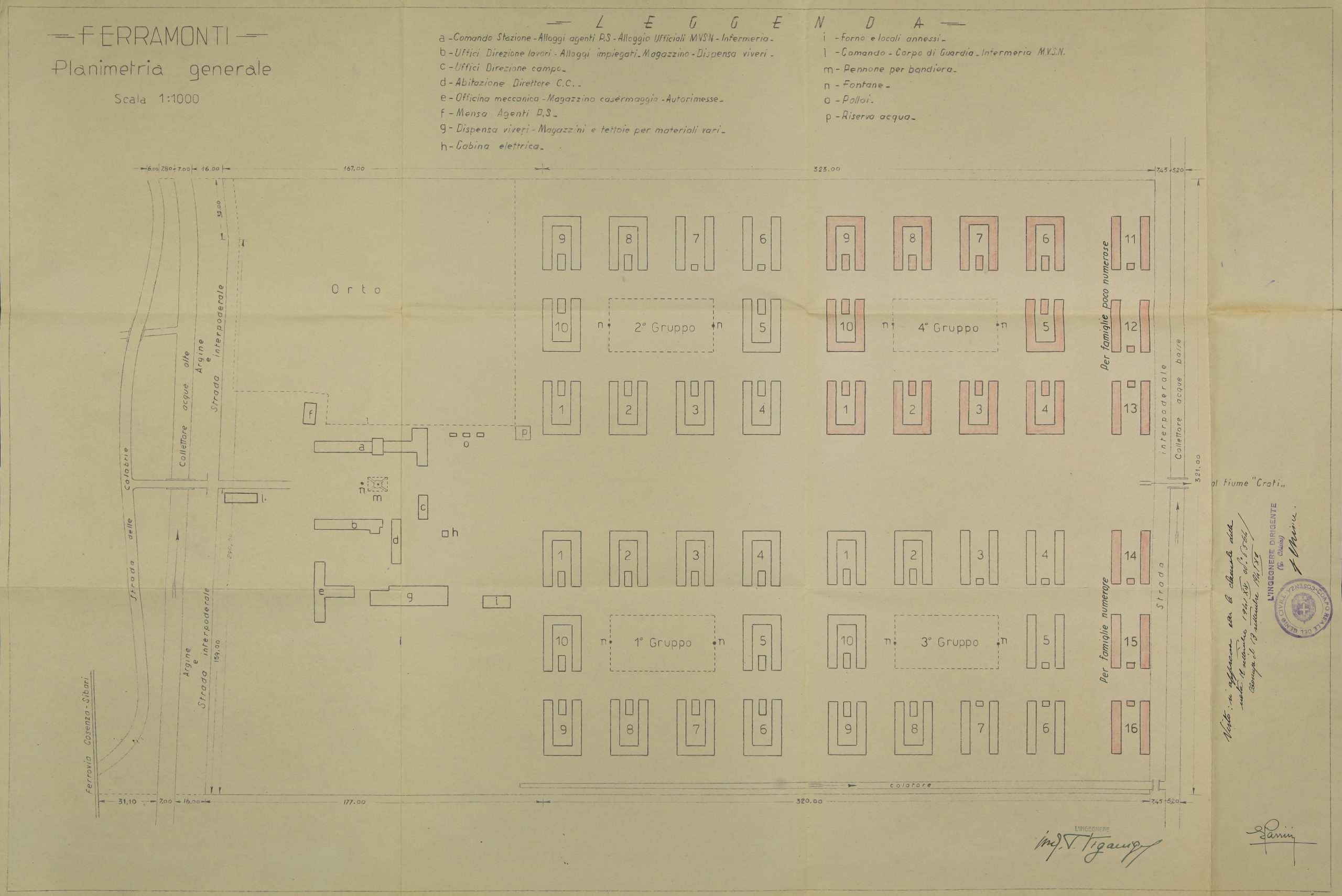 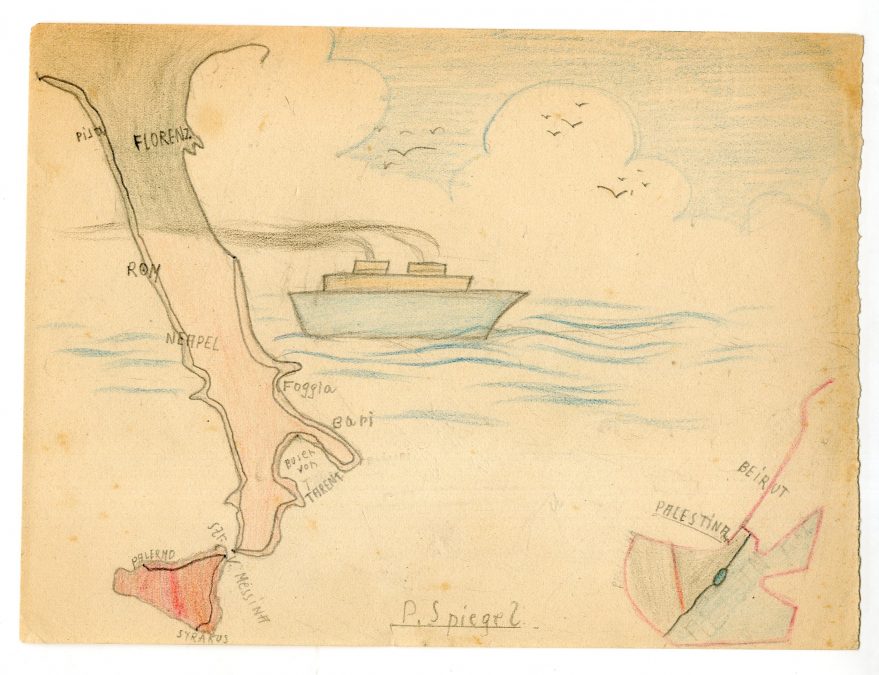 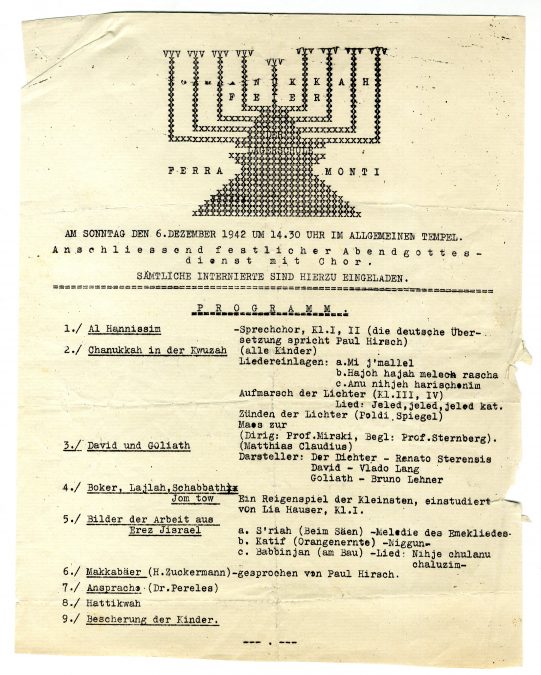 The internment camp of Ferramonti, 1942, cultural events programme. Internees seek to make their stay in the camp more bearable by organizing, also for children, concerts and cultural activities, such as those for the Feast of Chanukkah. Fondazione Centro di... 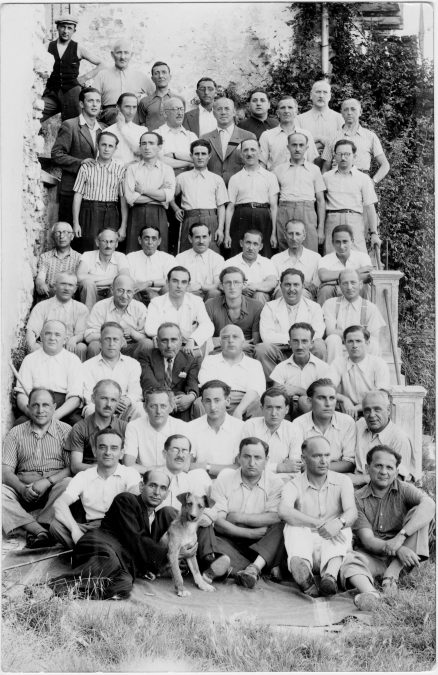 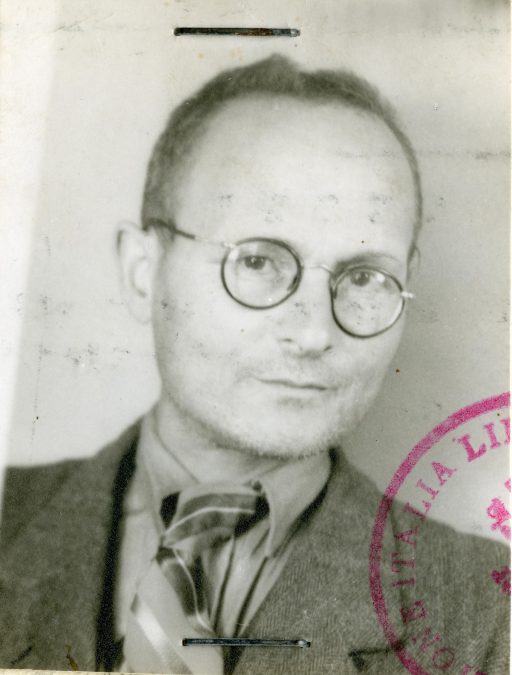 In the picture: Engineer Simone Samuele Spritzman (1904-1982), in June 1945 in Budapest. Originating from the Russian Bessarabia, Spritzman moved to Italy in 1923. In April 1939 he was dismissed by Magneti Marelli in Milan and in June 1940 he was arrested, as a Jewish... 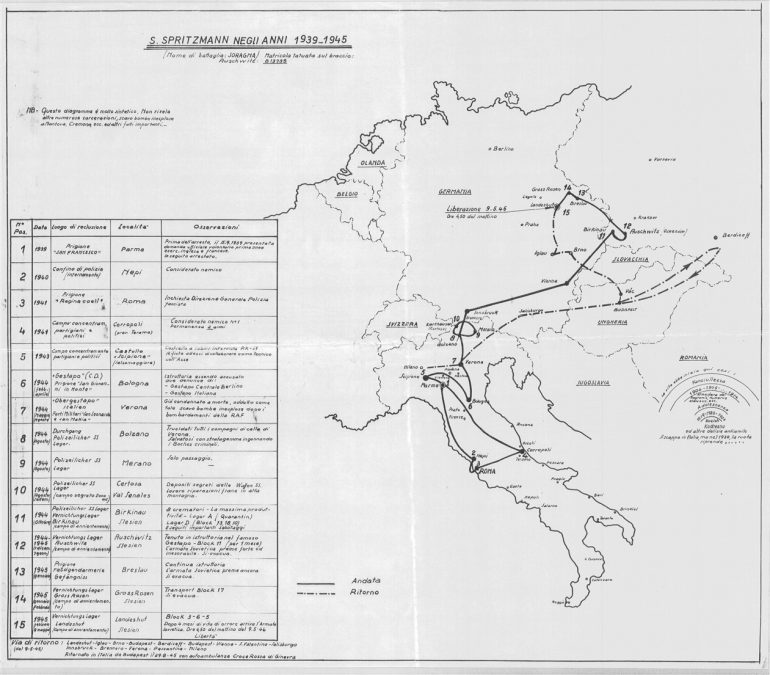 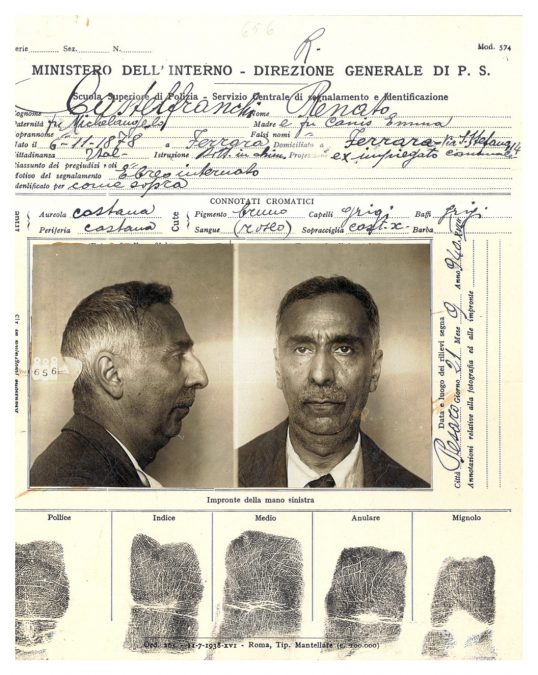 Directorate General of Public Security. File about ‘former municipal employee’ Renato Castelfranchi (1878-1944), a socialist from Ferrara. Interned at Apecchio (Pesaro) from 1940 to July 1943, he was again arrested after the killing of the federal secretary of... 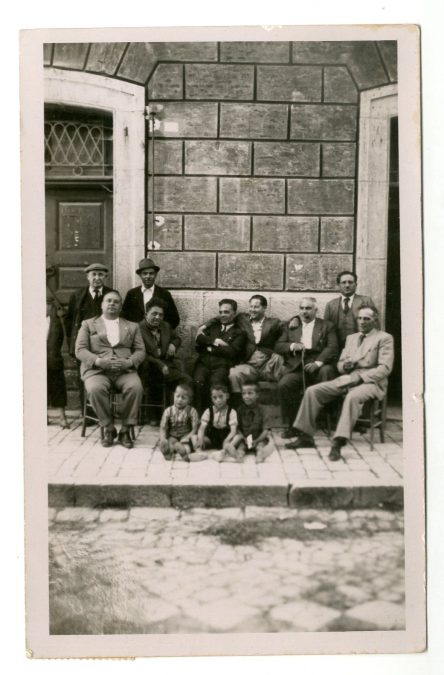 Salesman David Della Seta (1897-1965), sitting on the right with a stick in his hand. Photo taken on 27 July 1940 in Accettura (Matera), where Della Seta was confined because of his anti-Fascism. Fondazione Museo della Shoah, Roma Fondo Carla Paola Della Seta 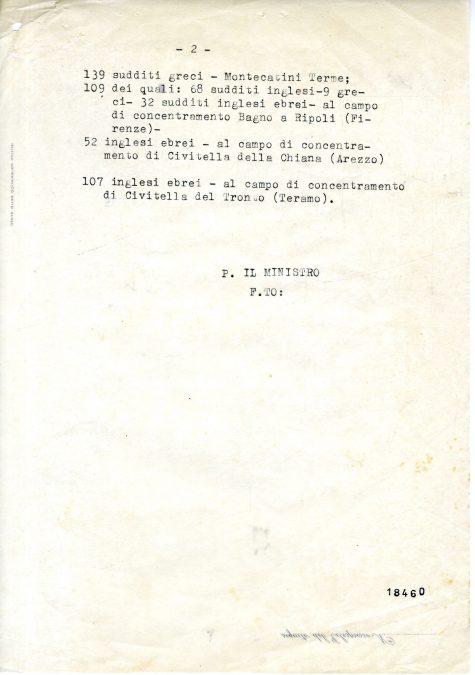 Libya, January 1942. The eviction of foreigners from Libya begins. 400 Libyan Jews of British nationality are deported to Italy and interned in camps as Civitella del Tronto, Civitella Val di Chiana, Bagno a Ripoli. In 1944 hundreds of them were deported to...