In mid-January 1938, Giuseppe Bottai, Minister of National Education, launched the first national survey on the Jewish presence in the country: it was an investigation into the situation of foreign Jewish university students. One month later, Mussolini turned his attention to the Jewish higher officers in the army, even conducting a census on the religion professed by the employees of his Ministry of the Interior and especially of those employed in police offices. These measures anticipated and announced the arrival of the following large census.

During the month of August the newly constituted office of the Ministry of the Interior, known as Demorazza, kept records of the Jewish population present on the national territory through a racially biased census which was carried out by individual municipalities under the supervision and coordination of the prefectures.

The aim was to identify all those who could potentially be persecuted. The result was that in Italy there were 58,412 people with one Jewish or former Jewish parent; of these, 46,656 declared themselves to be Jews (37,341 Italians; 9,415 of foreign origin). This amounted to 1.1 per thousand of the 43,900,000 people living in the country.

However, in order to establish the exact number of people to persecute, the definition of a person ‘belonging to the Jewish race’ had to be drafted, and this was done by the Fascist Grand Council on 6 October 1938. This definition then became statutory by Royal Law Decree on 17 November 1938.

However, unlike what had been laid down by the Nazi regime, the Fascist regime did not introduce the category of ‘mixed’ Jews: all those who were born of a ‘racially mixed’ marriage were classified as ‘Jews’ or ‘Aryans’ based on statutory criteria. 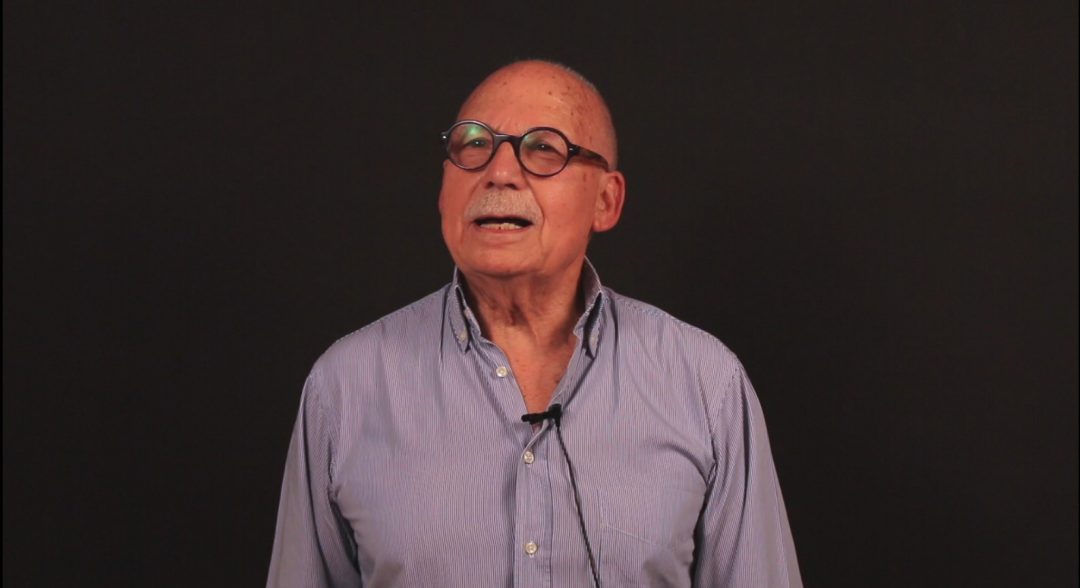 The definition of “race” is read by Marco Di Porto. 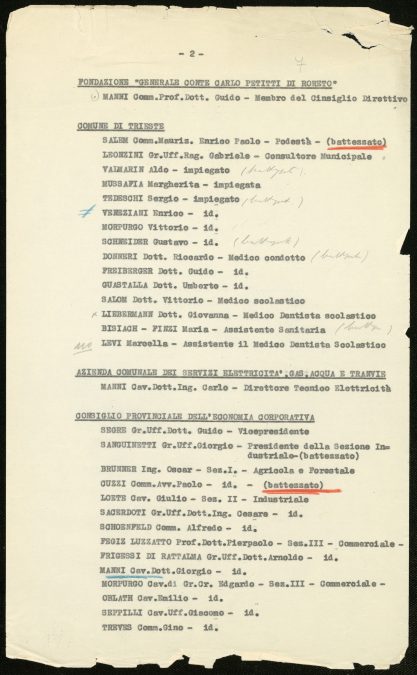 Trieste, June 1937. More than a year before the census of the Jews on a national scale, the President of the Province of Trieste, Piero Pieri, orders that a list of all the Jews in the city, grouped by assignments, be drafted. He stresses that he has taken account of... 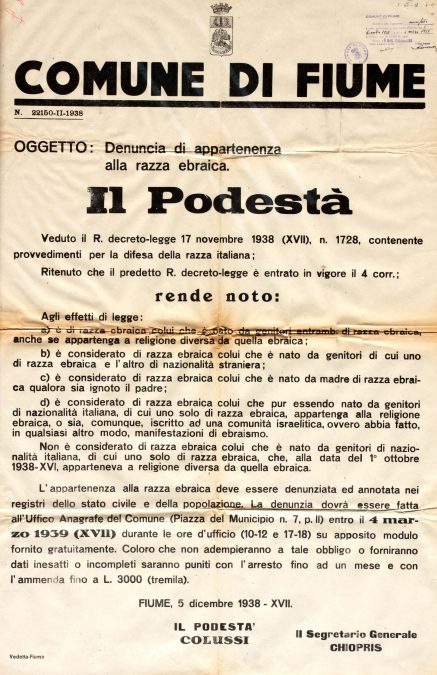 Fiume, December 1938. Podestà Carlo Colussi states that all citizens who, under the law of 17 November, are to be defined as belonging to ‘the Jewish race’ must denounce their ‘belonging’ by 4 March 1939. Državni Arhiv Rijeka (Archivio di stato Fiume) Sanja Simper, Od... 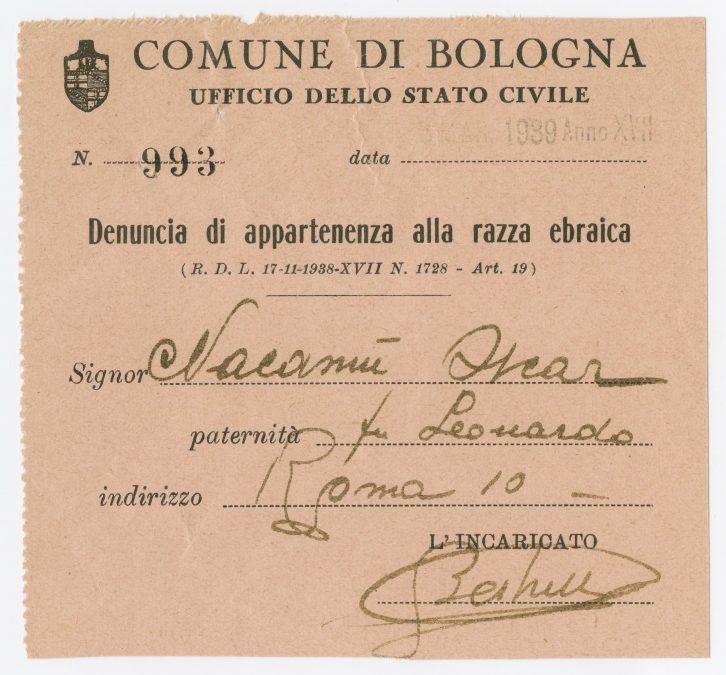 Statement, reporting ‘belonging to the Jewish race’, presented in 1939 by Oscar Nacamù to the Municipality of Bologna. United States Holocaust Memorial Museum, Washington 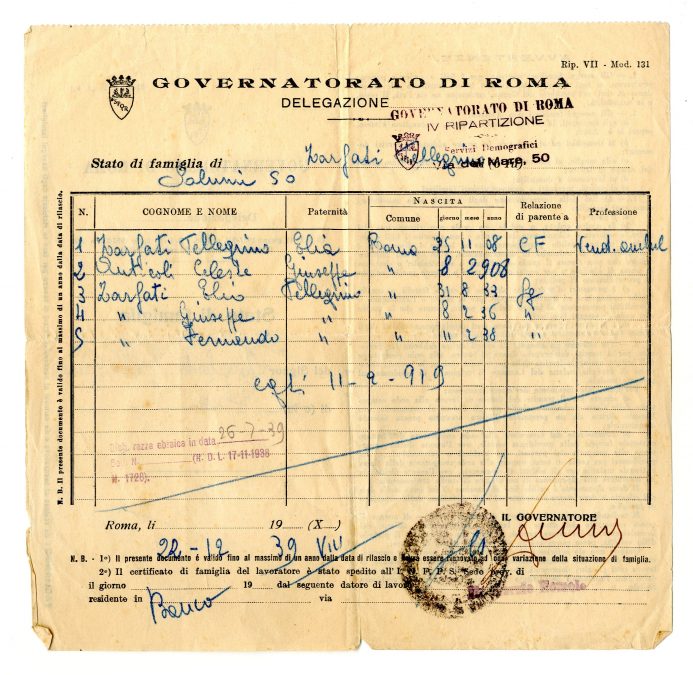 Family certificate of Pellegrino Zarfati (1908-1989) in which it is indicated that his belonging to the ‘Jewish race’ was declared in July 1939. Fondazione Museo della Shoah, Roma Fondo Lorella Zarfati 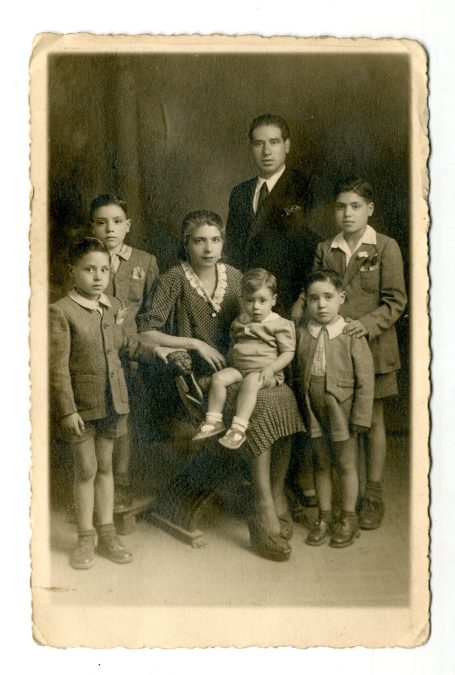 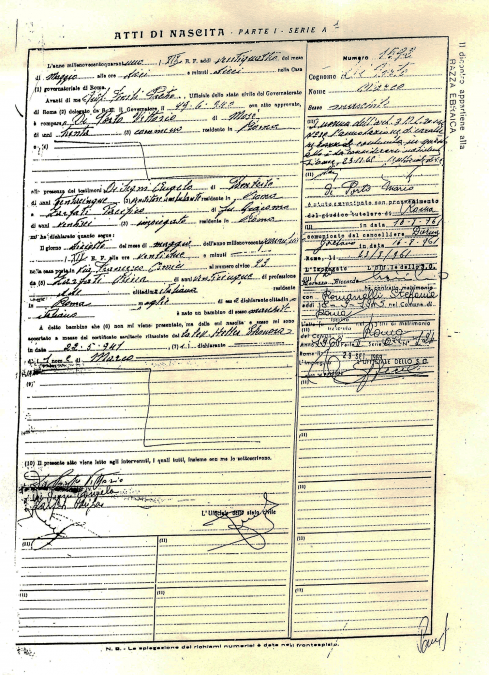 Birth certificate of Marco Di Porto. On the right side of the document, belonging to the ‘Jewish race’ is indicated. Anagrafe Centrale, Roma 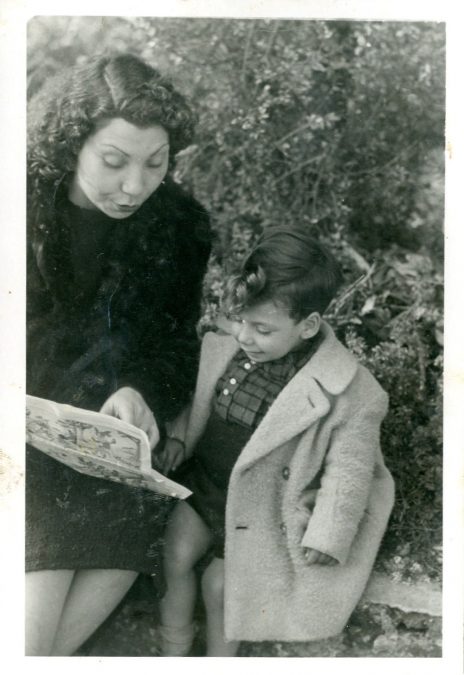 Photo of Marco Di Porto together with his mother Rina Zarfati (1916-1985), taken in Rome at the Convent of the Sisters of the Seven Sorrows in via Garibaldi, where the Di Porto family was in hiding from 19 October 1943 to 4 June 1944. Fondazione Museo della Shoah,... 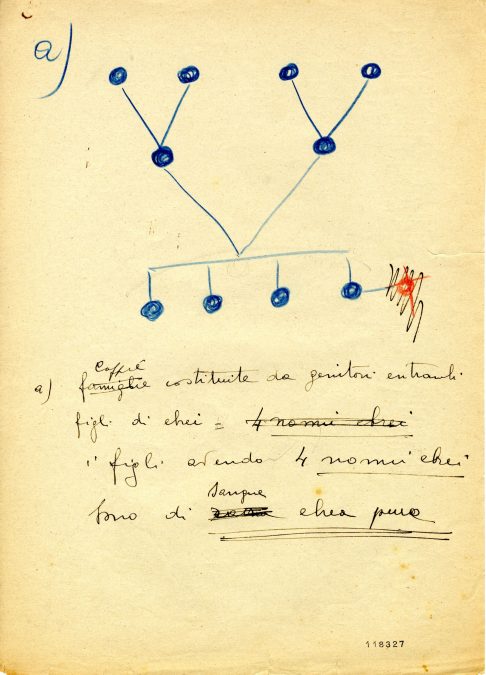 September 1938. The Directorate General for demography and race processes some genealogical tables to define ‘belonging to the Jewish race’ or the ‘Aryan race’. Archivio Centrale dello Stato, Roma 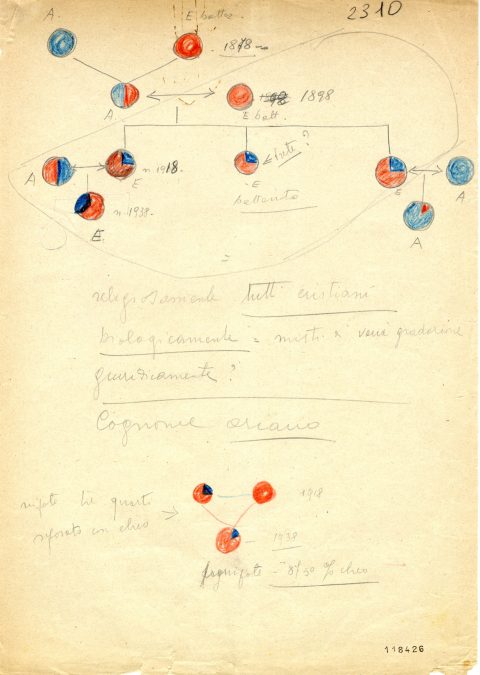 Visualization, drawn up by Demorazza, of the presence in a person of ‘Jewish’ and ‘Aryan’ biological characteristics: scientific nonsense. Archivio Centrale dello Stato, Roma 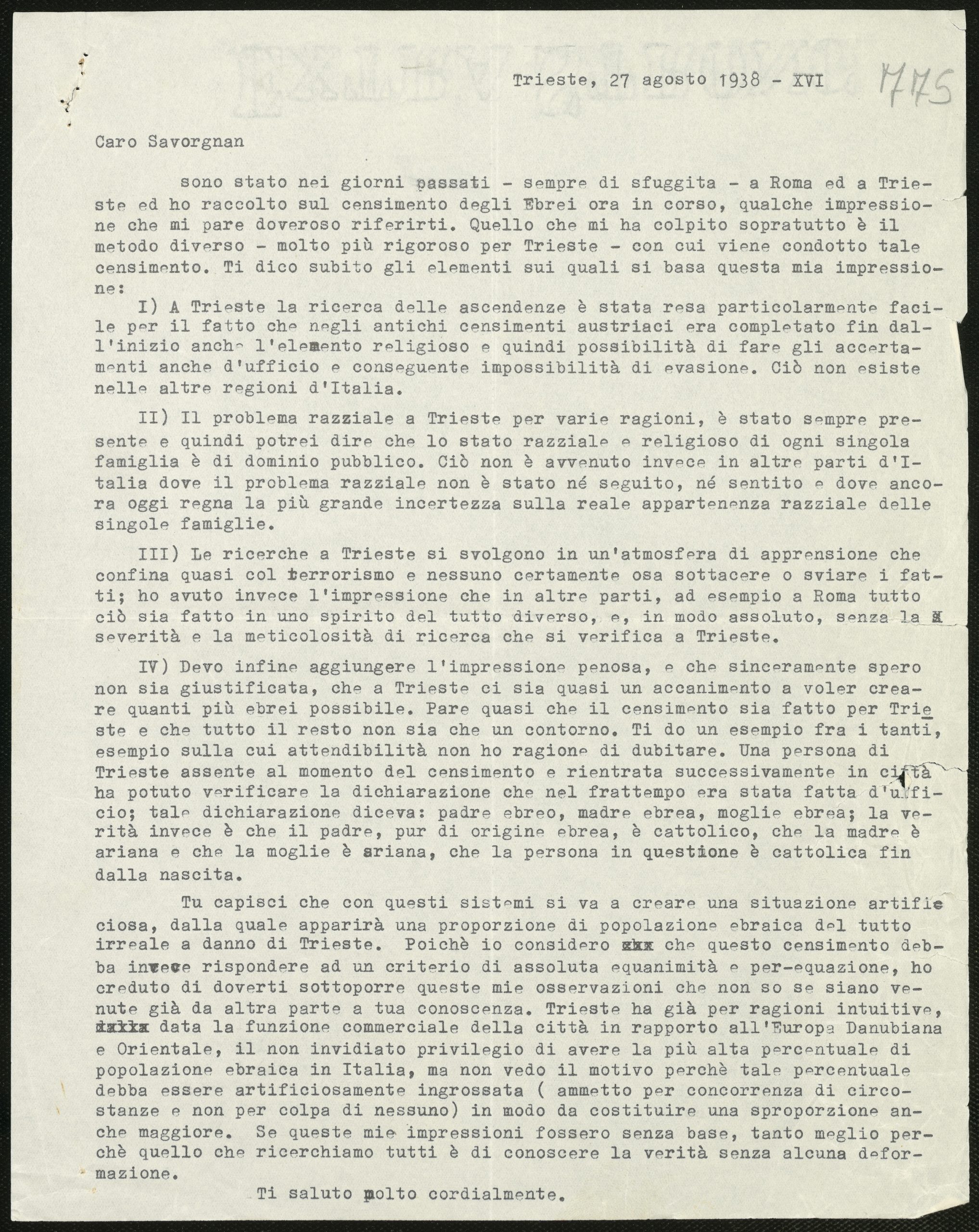 Trieste, 27 August 1938. Emilio Grazioli (1899-1969), the Federal Secretary of the PNF (National Fascist Party). He criticizes the national census method, which he thinks is much less strict than the one applied in Trieste. Archivio di Stato, Trieste 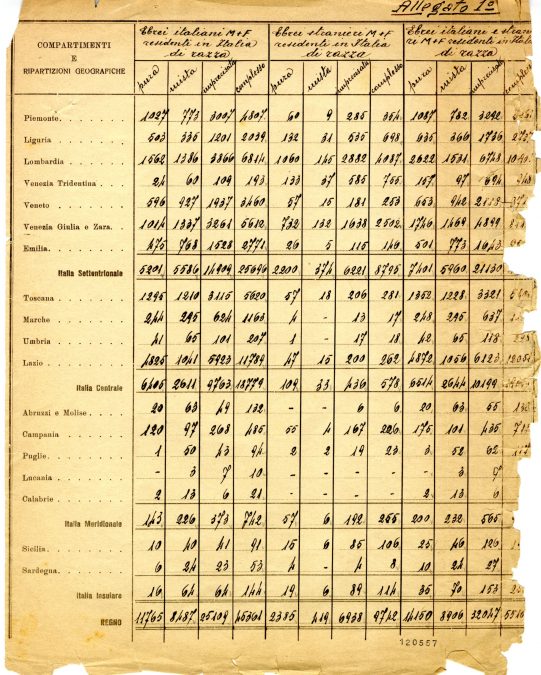 In a statistic of ISTAT, drawn up for the Directorate general for demography and race, the number of ‘pure’, ‘mixed’, and ‘unknown’ Italian and foreign Jews in all regions of Italy is listed. Archivio Centrale dello Stato, Roma 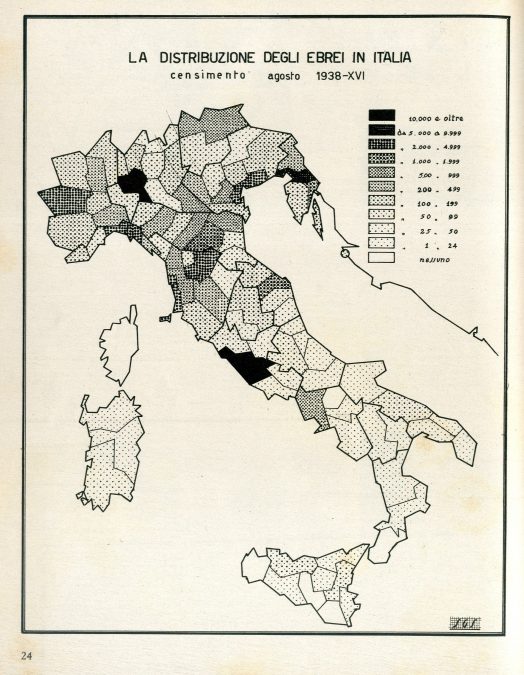 The census serves as the basis for a map of the Jewish presence in Italy proposed by La Difesa della Razza in the 20 October 1938 edition. Fondazione Museo della Shoah, Roma 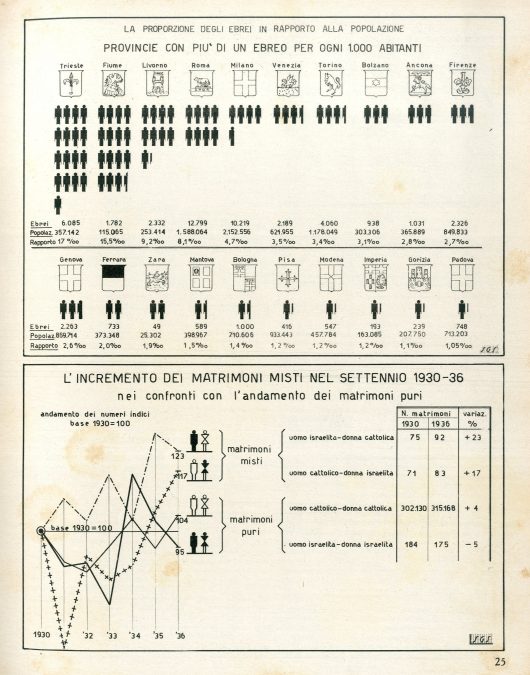 In the 20 October 1938 edition of La Difesa della Razza, the ‘high’ percentage of Jews in some provinces and the growing number of mixed marriages between Jews and Catholics until 1936 are highlighted. Fondazione Museo della Shoah, Roma