The anti-Jewish laws issued by the regime radically affected culture and education. Indeed, one of the first decrees (issued at the beginning of September 1938) ordered the exclusion of Jews from public schools and universities. This was a more drastic measure than the introduction of the numerus clausus adopted by other countries which supported anti-Jewish policies. This measure would drastically reduce the future number of Jews in liberal professions, leaving more room for their ‘Aryan’ competitors. Only the Jewish communities were allowed to take care of the students expelled from public schools; in some cities separate classes were introduced. Only those who had already started university studies were allowed to continue.

Besides Jewish students, there was a significant presence of Jewish professors and teachers in education and culture”.  Along with students, the Minister of National Education, Giuseppe Bottai, also expelled teachers of ‘Jewish race’. This measure affected: 279 principals and teachers of secondary and high schools; 96 full and associate University professors, namely 7 % of the entire category; over 200 untenured professors; at least 133 tutors, assistants, and adjunct professors; and over 100 primary school principals and teachers, as well as thousands of students.

Every Jewish reference was erased from the educational system, such as school names, textbooks written by Jewish authors (114) and by ‘Aryan’ authors referring to Jews who had died after 1850, geographical wall maps by Jewish authors, etc.

No more exhibitions by Jewish painters and sculptors were organized, and no publishing house published new books by Jewish authors (those already published were gradually withdrawn from circulation). Jews could not even ‘access public and government libraries’.

The Minister of Popular Culture Dino Alfieri banned ‘all activities in the entertainment industry’: directors, actors, musicians, such as Mario Castelnuovo Tedesco and Vittore Veneziani, performers, singers, authors, etc. disappeared from radio programmes, from opera and prose theatres, and from cinemas, and their names were removed from records catalogues, etc.

At least 672 members were expelled from scientific, literary, historical, and musical academies. As Minister Bottai wrote, it was an ‘absolute progressive elimination of the Jews from the vital nerve centres of the nation’.

3 September 1938. Il Messaggero announces the expulsion of Jewish students and teachers from schools and universities. The decision is taken by the Council of Ministers (see ‘Measures for the defence of the race in the fascist school’, Decree-Law no. 1390 of 5... 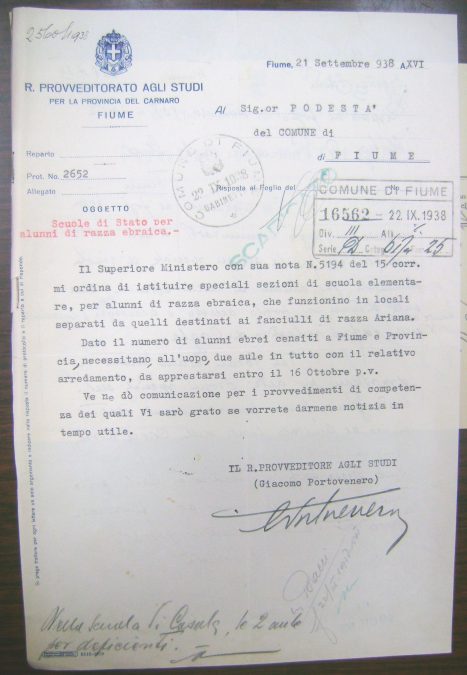 In some cases, ‘special’ school sections are created for Jewish students. The premises must be separated from the ‘normal’ ones, and the schedule is different. This document of 21 September 1938 concerns the city of Fiume. Državni Arhiv Rijeka (Archivio di stato... 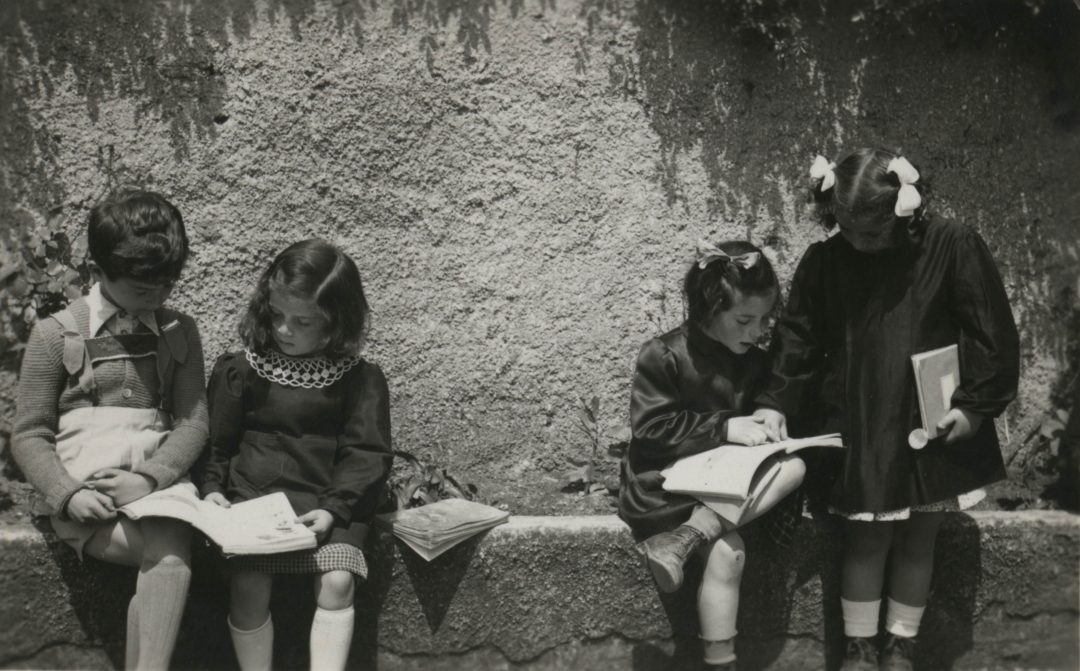 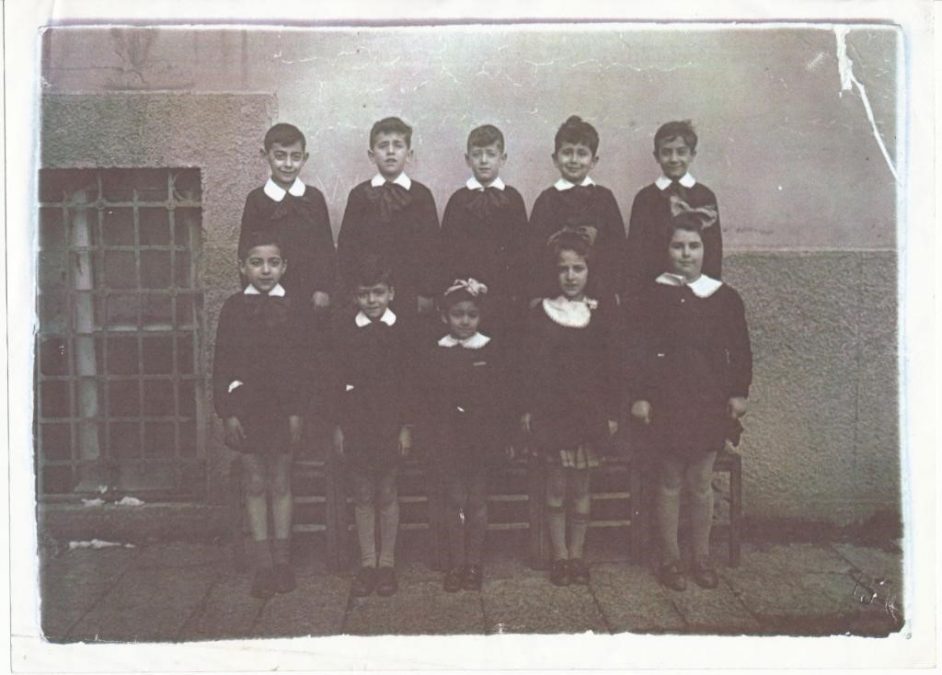 Naples. A special class for Jews created in 1938. At the top, the second from the left is Dario Foà, and the third is his brother Tullio. Fondazione Centro di Documentazione Ebraica Contemporanea, Milano 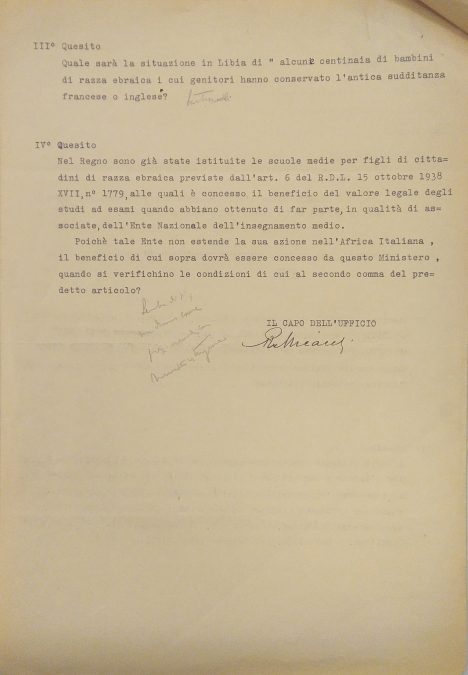 February 1939. The Ministry of Italian Africa seeks to clarify some questions about the application, in Libya and in the Italian Eastern Africa, of the decree which ejects Jewish students from public schools. Ufficio storico dello Stato Maggiore dell’Esercito, Roma,... 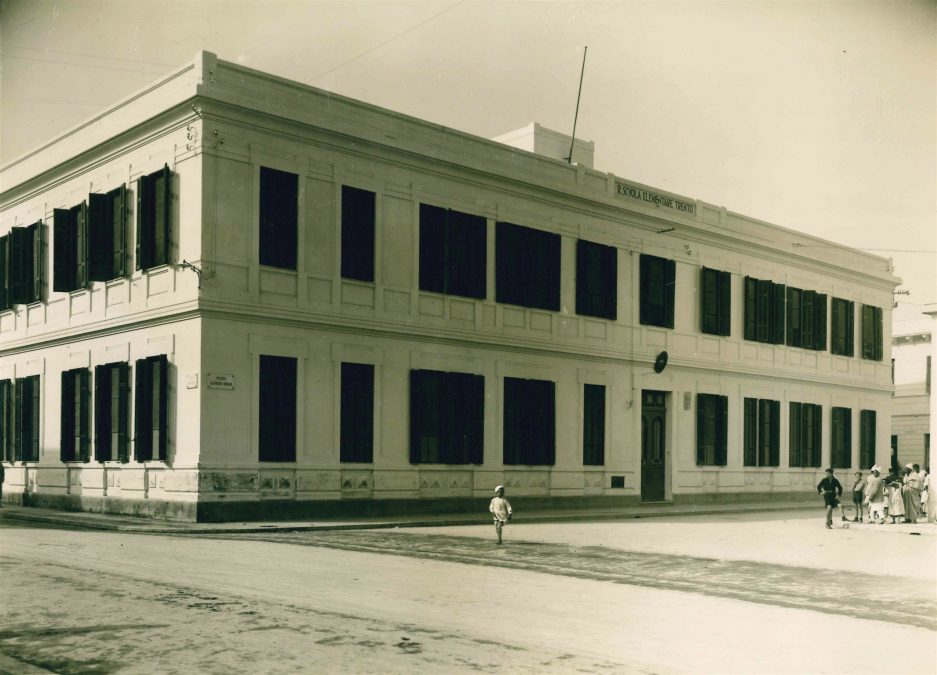 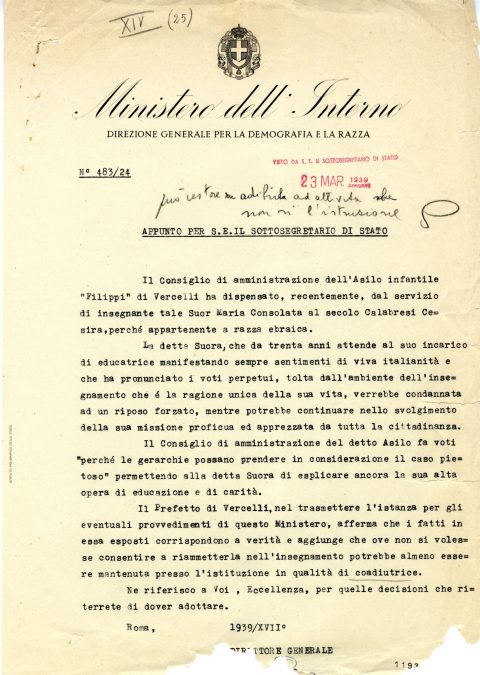 March 1939. The Directorate General for demography and race reviews the case of Sister Maria Consolata of ‘Jewish race’. The nun is a teacher at the Kindergarten of the ‘Filippi’ Institute in Vercelli and has been suspended from teaching. Born with the name of Cesira... 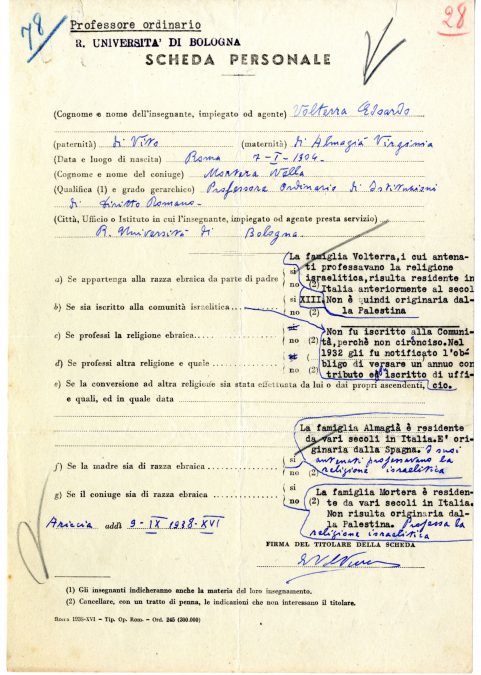 One of the personal files compiled for the census of the ‘Jewish race personnel’. This file refers to Full Professor Edoardo Volterra (1904-1984), of the University of Bologna. After his expulsion from University, this scholar of Roman law taught and did research in... 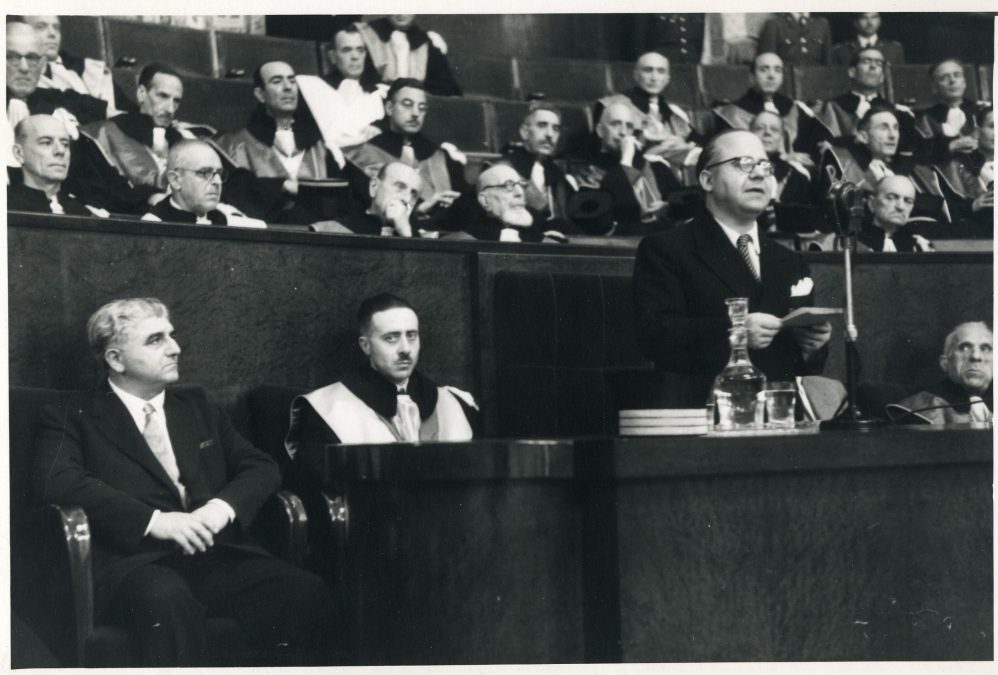 The Aula Magna of the University of Bologna, 22 June 1947. Seated in the centre, Rector Edoardo Volterra, during a commemoration of Guglielmo Marconi. Biblioteca Universitaria di Bologna, sezione Archivio storico

At the Ministry of National Education lists are drawn up of university staff ‘that belong to the Jewish race’. Displayed here is the list of ‘ordinary and extraordinary tutors and assistants’. Archivio Centrale dello Stato, Roma 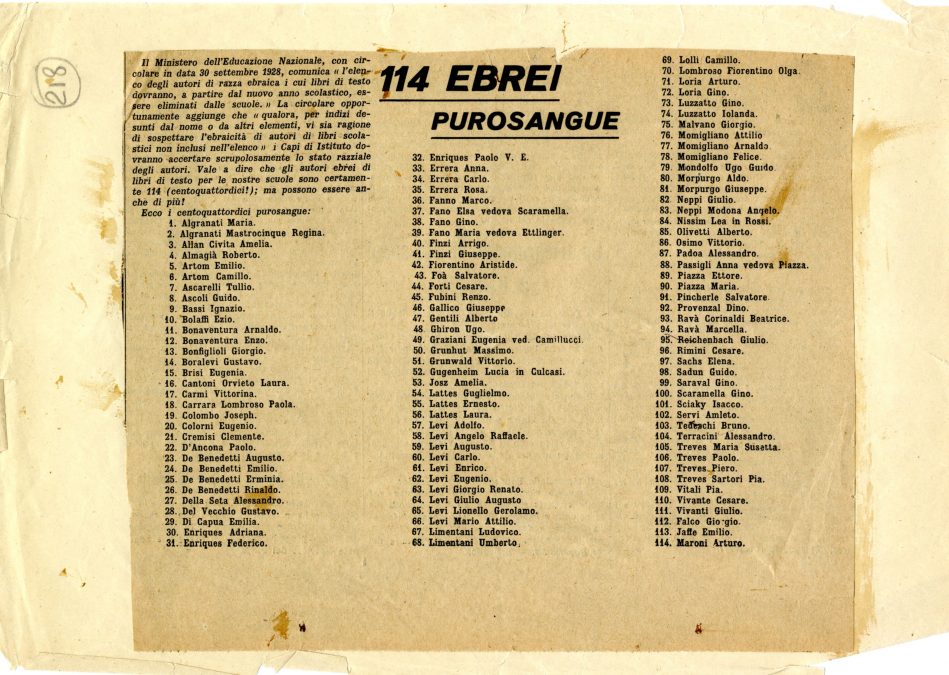 September 1938. The Ministry of National Education prohibits the presence of texts of Jewish authors in schools. Some newspapers list the names of ‘114 purebred Jews’ authors of textbooks. Jewish works are then banned also from opera and prose theatres, radio... 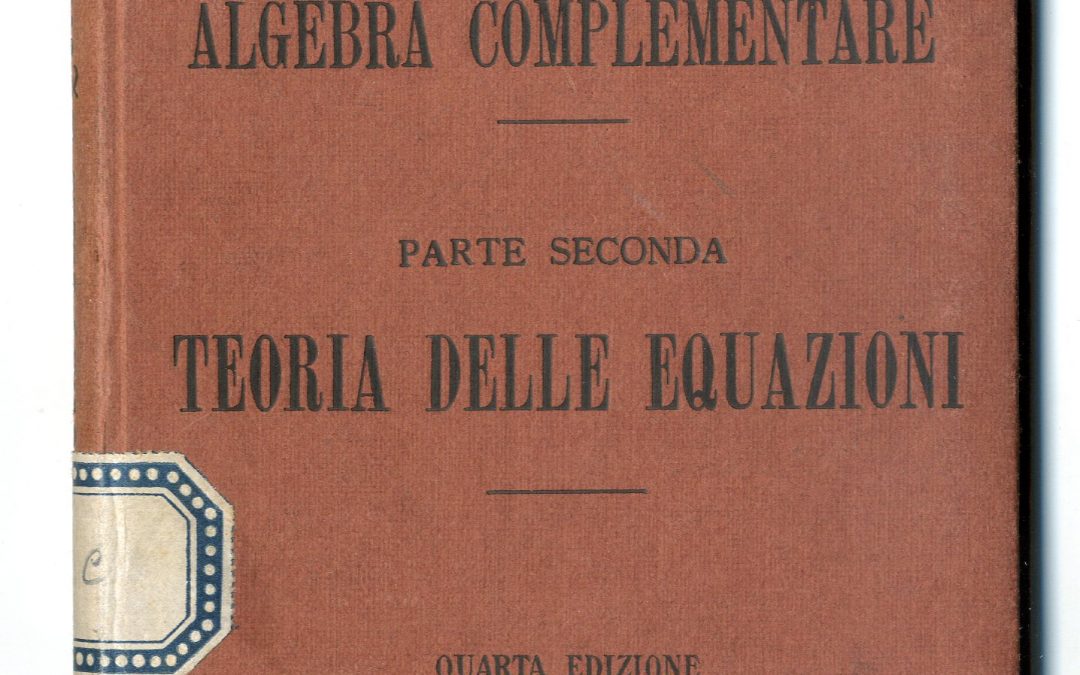 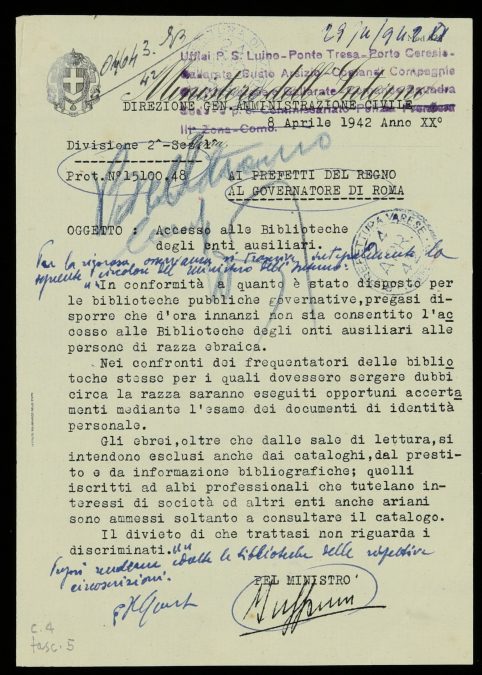 April 1942. After having already placed a ban on ‘people of Jewish race’ accessing public libraries, the Ministry of Interior prohibits access also to those of the auxiliary bodies. Archivio di stato, Milano 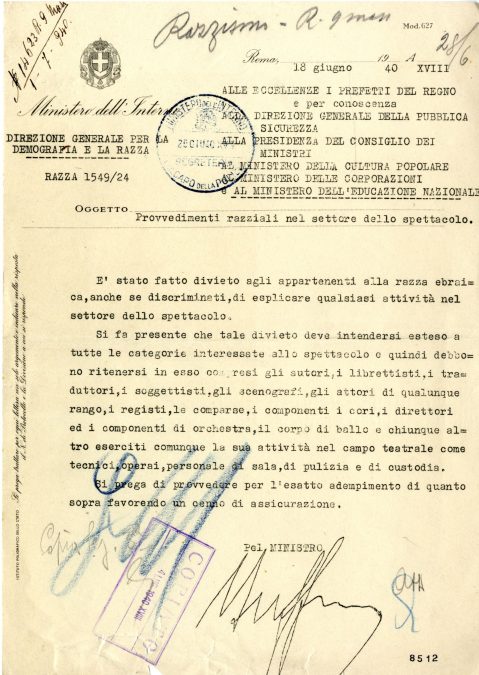 18 June 1940. The Directorate General for demography and race, with a circular to the Prefects of the Kingdom, prohibits Jews from performing any activities in the entertainment field (see also law of 19 April 1942). Archivio Centrale dello Stato, Roma