The Fascist attempt to separate the Jews from the rest of the national community, a policy that was intended to force them to emigrate, is clearly visible in the legislation of the years 1938-1942 on the withdrawal of the right to work. The resulting dismissals caused an impoverishment of Jewish families, worsened by the fact that the poorest ones were denied all State subsidies. This policy began in November 1938 with the expulsion of Jews from all public jobs, ranging from ministries and local government (provinces and municipalities) to public transport companies. Even tram drivers were involved.

The prohibitions also affected those who were employed in various capacities by ‘parastatal bodies and businesses or by private businesses that were controlled or supported by the State’. Clearly, employees of banks of ‘national interest’, along with those working for private insurance companies, were dismissed too.

Between 1939 and 1942 these prohibitions were extended – sometimes by simply withdrawing licenses – to many other activities, including those considered as more humble: private teachers, street vendors (a common activity in the Rome Jewish community), landlords who let rooms, sellers of holy (Catholic) objects, jewellers, street performers, photographers and breeders of homing pigeons, owners of dance schools, (used) rag and wool sellers, etc.

In 1942, those who worked in private companies considered to be ‘auxiliary to war production’, such as FIAT, Montedison, and shipyards, were dismissed.

The ‘exceeding’ properties were to be transferred to the Ente Gestione e Liquidazione Immobiliare – EGELI (Agency for the Management and Liquidation of Real Property), an agency created to acquire, manage, and resell properties seized from Jews. In 1940, after Italy entered the war, EGELI was also given the power to seize assets owned by foreigners with an ‘enemy nationality’. 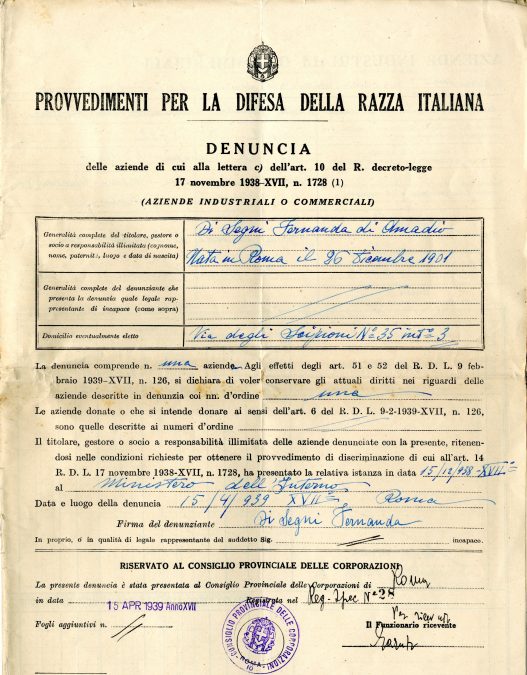 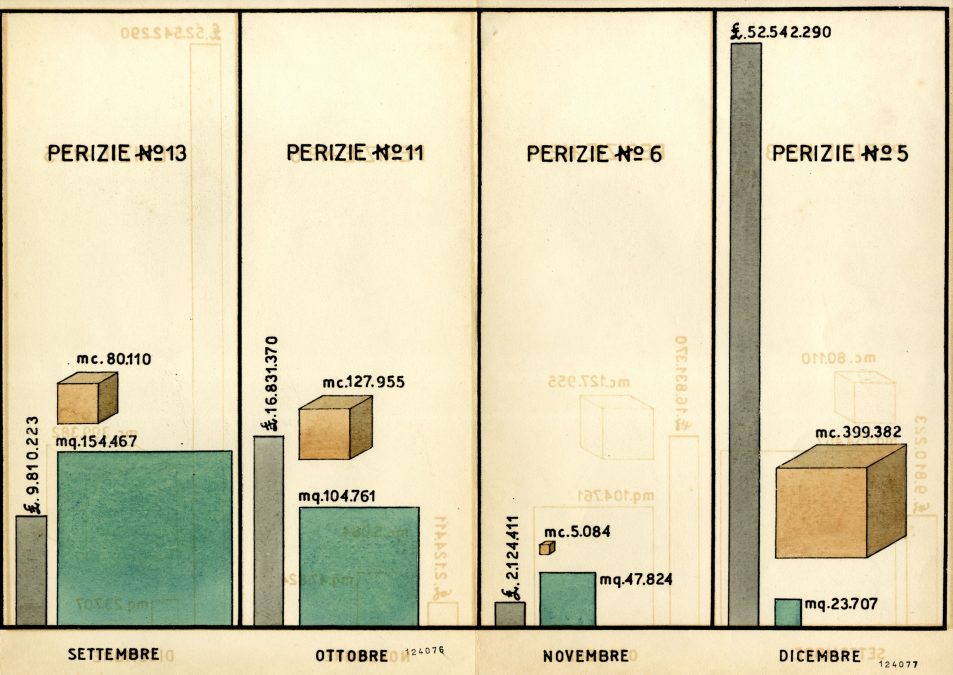 Viewing of the expropriation expertise of money amounts, land, and buildings in Rome in 1939. The institution responsible for the administration of the properties expropriated from the Jews is the newly established Ente gestione e liquidazione immobiliare (Egeli).... 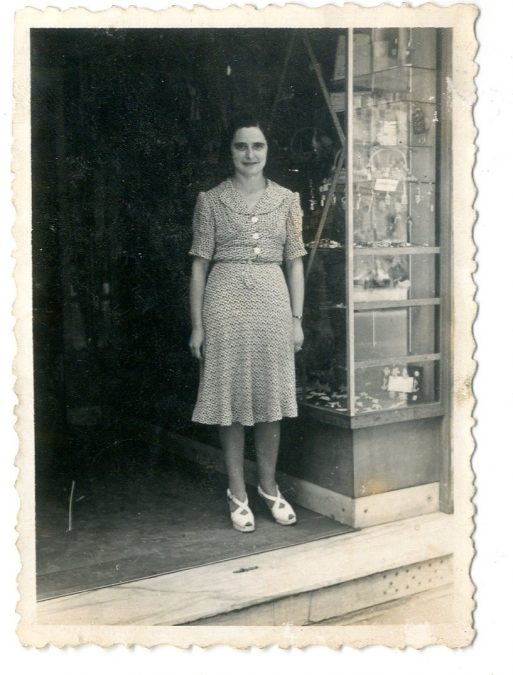 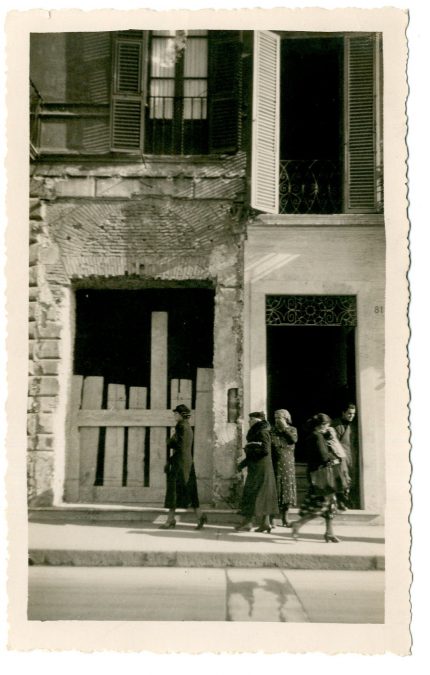 The closed and barred shop owned by Regina Ascarelli in 1940. It was reopened in the post-war period and continued its activities until 1969. Lattes-Ascarelli Family Private Archive, Roma / Fondazione Museo della Shoah, Roma 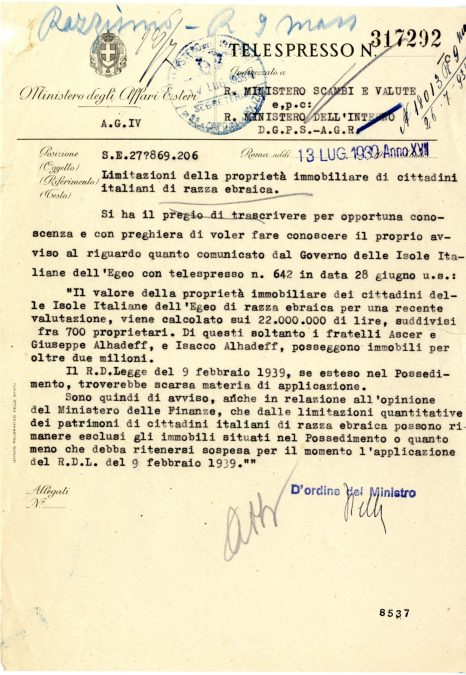 Investigations into Jewish property were also carried out on the island of Rhodes. Here, the cases concerning the Alhadeff brothers (Ascer and Giuseppe) and Isacco Alhadeff are highlighted. Archivio Centrale dello Stato, Roma 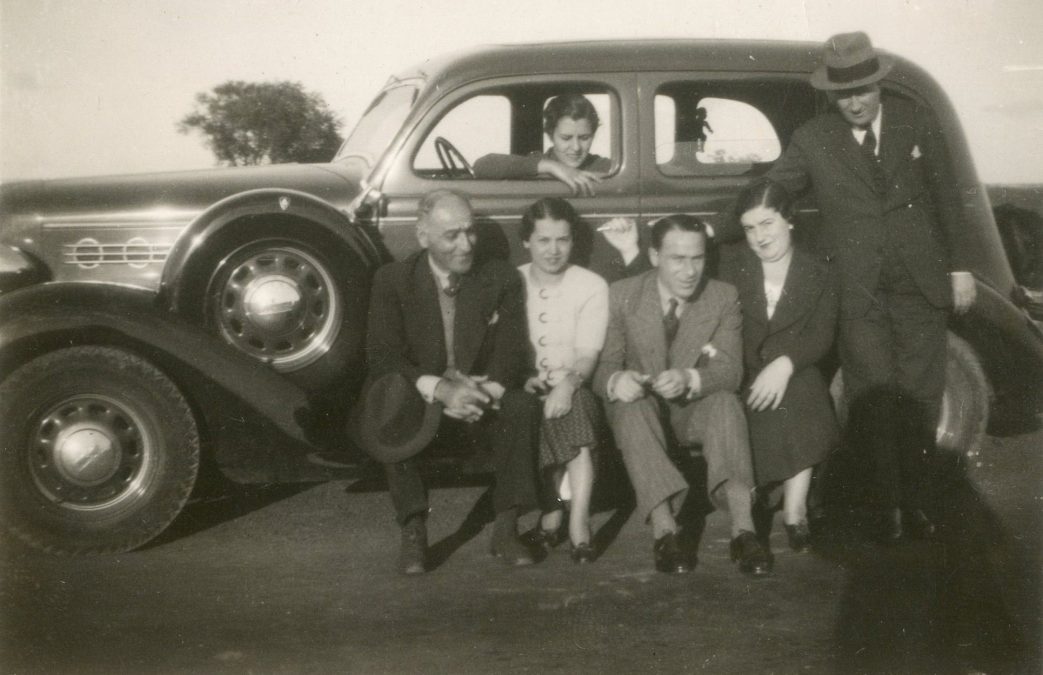 In this picture, taken in 1936, we see Isaac Alhadeff (seated) and his daughter Sarah (inside the car) with her husband Robert Barcilon (seated). Jacob Isacco ‘Haco’ Alhadeff (1879-1955) was the founder of the Isaac Alhadeff bank. After the promulgation of the... 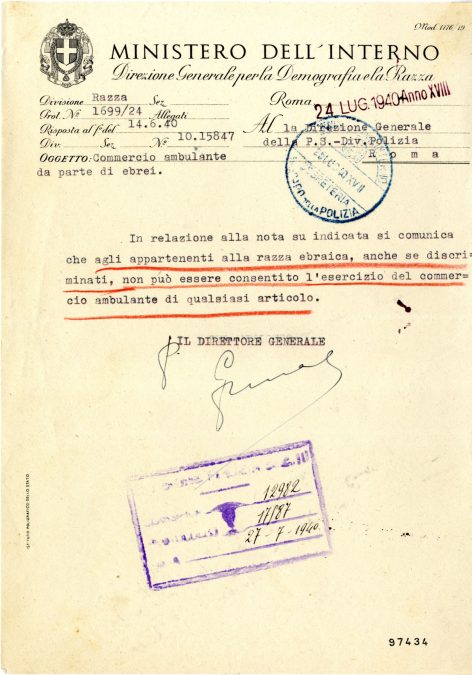 Between June and July 1940, it was decided that Jews could no longer work as street vendors, as communicated by the Directorate General for Demographics and Race to the Public Security Department. The prohibition applies to the poorest layers of the Jewish... 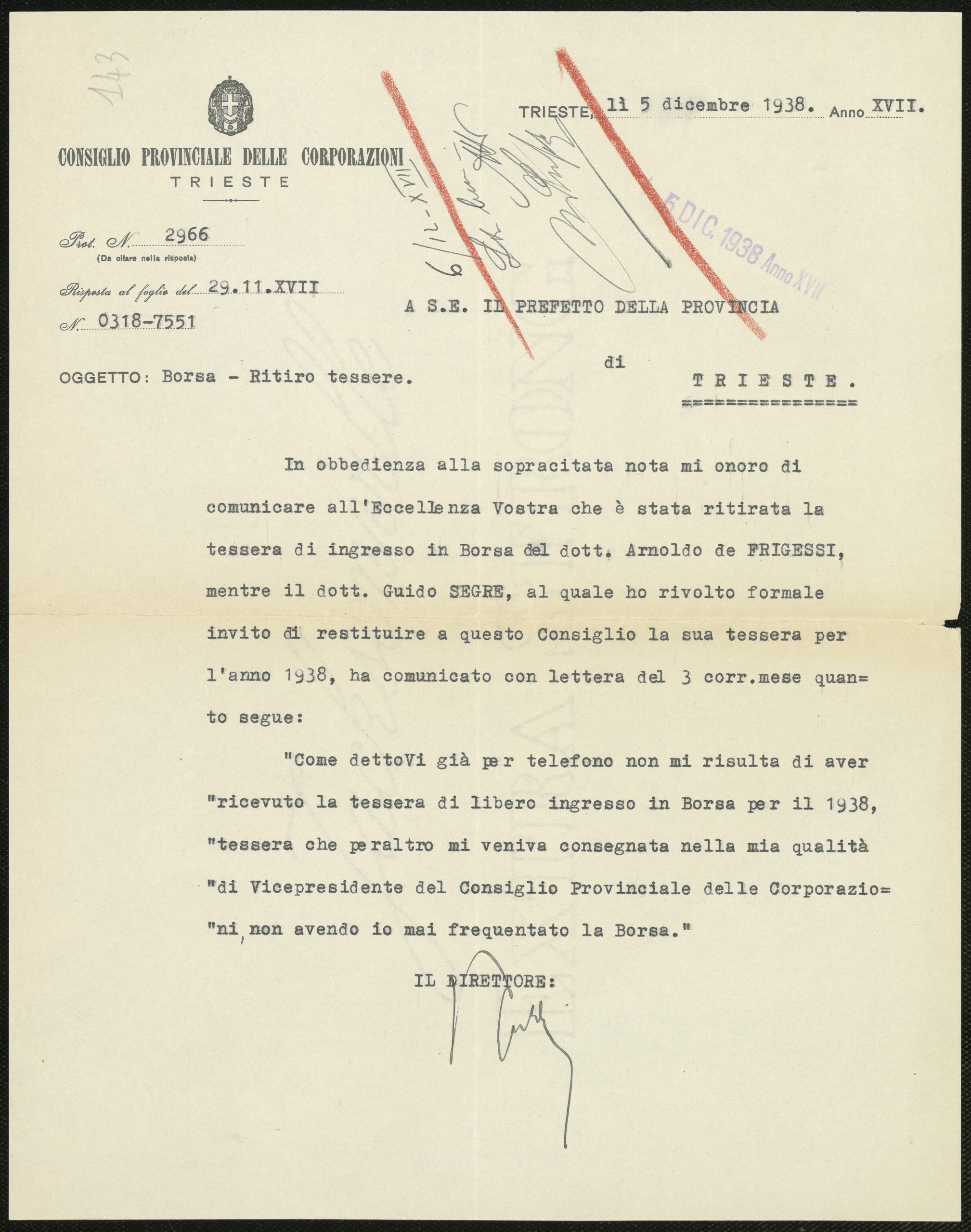 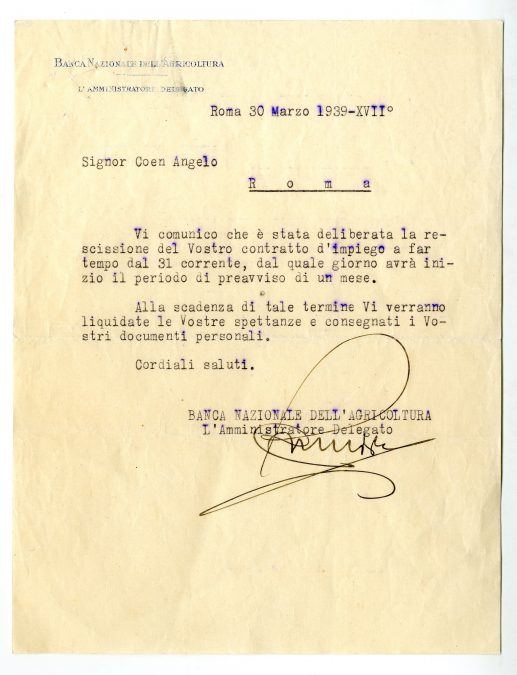 Rome, 30 March 1939. Letter of dismissal received by Angelo Coen (1900-1963), employed by the National Bank of Agriculture (see Art. 13 of Decree-Law of 17 November 1938, in which it is forbidden for ‘Managers of banks of national interest’ to employ people belonging... 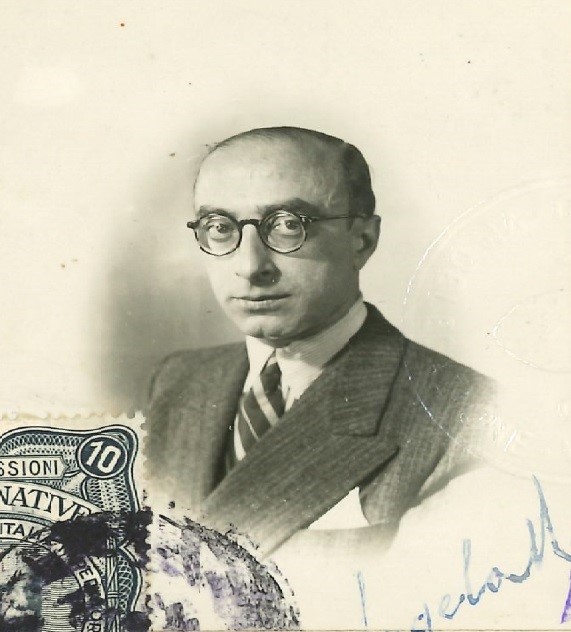 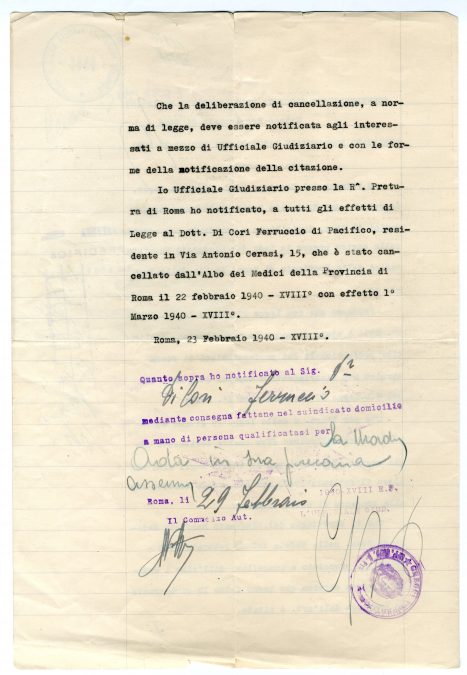 Two photos of Ferruccio Di Cori: the first is taken in 1936, a few days before he took a degree in Medicine and Surgery; the second in 1947 in New York, where he would specialise in psychiatry. Fondazione Museo della Shoah, Roma Fondo Serena Viterbo

The expulsion of Jews from almost all fields of work is also evident in the amendments included in the ‘Dictionary of today’s Italians’. Here, facing each other, the 1936 edition of ‘Who’s Who’ with university professors, senators, painters, engineers, and lawyers...